Farmers who can’t get into their cropfields to work because of excessive June rainfall shouldn’t surrender to Mother Nature, Purdue University Cooperative Extension Service specialists say.

There was no shortage of  in the month’s first 23 days, leaving thousands of acres of corn, soybeans and hay either in standing water or in drenched soils, and producers desperate to tend to their crops.

On the positive side, the rain, heat and humidity has accelerated corn crop development — so much so that many crops have outgrown the ability of some insects to feed on them, Vyn said. That rapid growth, however, is quickly making weed control more difficult and delaying necessary nitrogen fertilizer applications.

“I would encourage farmers not to give up on those applications and to keep trying,” Vyn said.

Corn can use nitrogen even if it is applied later than normal, said Jim Camberato, a soil fertility specialist. The preferred application method for tall corn is as a sidedress, where 28% urea ammonium nitrate (UAN) is dribbled in a band between corn rows with a high-clearance applicator equipped with drop tubes.

“Corn can still respond strongly to fertilizer nitrogen through the V12 growth stage — about shoulder high — if it is healthy,” Camberato said. “The capacity to respond to added nitrogen diminishes from then until silking, with little potential for response during grain filling.”

As hot as the weather has been since the heavy rains, ponded and flooded corn will not survive long, said Bob Nielsen, corn specialist. Corn that is completely under water is in greater danger than corn partially in water.

Because temperatures in the upper 80s to low 90s are causing corn plants to develop faster than normal, root death by drowning can quickly occur, Nielsen said.

Soil oxygen is depleted within about 48 hours in saturated conditions, he said. Oxygen-depleted corn plants struggle to take up nutrients and water, and root growth is inhibited. Waterlogged corn is susceptible to such diseases as common smut and crazy top.

“No one can tell with certainty the day after a storm whether a ponded area of a cornfield will survive or whether there will be long-term yield consequences, until enough time has gone by such that you can assess the actual recovery of the damaged plants,” Nielsen said.

As June progresses, farmers are in a race against time to put soybeans in the ground. For those producers, midseason varieties are the way to go, said Shaun Casteel, soybean specialist.

Midseason varieties provide better maturity potential before the first fall freeze than full-season varieties would at this point, Casteel said. By June 30, midseason varieties offer about 70% of their normal yield potential. Late-planted soybeans should be seeded in narrow rows with 15-20% higher seeding rates than normal.

“At this point it really doesn’t make sense to replant in many situations,” he said. “If producers look at their fields and they have 50,000 plants or so, they can still get around 85% of their yield potential. So why go to the trouble of ripping those out to replant for 70%?”

Hay producers struggling to harvest their forage might consider turning wet hay into silage, said Keith Johnson, forage specialist. That can be done by wrapping the crop in plastic, either in individual bales or in a single, long strand with an in-line tuber.

Known as “balage,” the wrapped hay can be harvested at moisture levels of 50-60% rather than the usual 18-20% for dry hay. Most uncut hay has a moisture content of about 75%.

It costs about $4 in plastic to wrap an individual bale and $2 if wrapped with an in-line tuber, once a producer has purchased or rented a bale wrapper or in-line tuber.

“If you have weeds over a foot tall, do not expect complete weed control,” Bill Johnson said. “All you can really hope for is suppression and lessening the impact on final yield.”

In soybeans, volunteer corn is enemy No. 1. The weed can be controlled using postemergence herbicides that were popular before the introduction of Roundup Ready soybeans, including Select Max, Clethodim, Assure II/Targa and Fusilade DX, he said.

More information on these flood-related crop issues is available from the following Purdue Extension papers and websites: 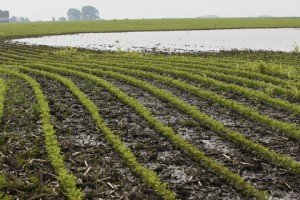