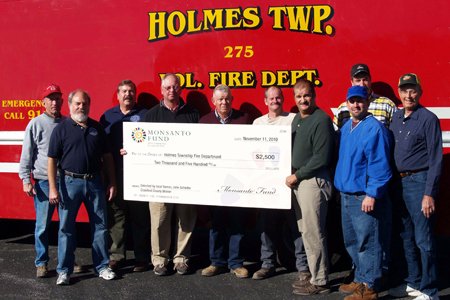 The Crawford County firefighters have taken a proactive role in farm safety with emphasis on grain handling and grain rescue issues.  According to the U.S. Department of Labor suffocation is the number one cause of death relating to grain handling on U.S farms.  The firefighters have recognized the urgency for better preparedness in assisting with grain rescue emergencies.

Under this pilot program, farmers throughout 298 eligible counties from seven states with heavy grain production could enter to win a $2,500 award for a local no-profit community group of their choice.  “We are pleased to present a check for $2,500 on behalf of the Monsanto Fund to the Holmes Township Volunteer Fire Department for their outstanding application with a worthwhile cause,” commented Keith Buckingham, Account Manager, Monsanto Company.

Entrapment by grain and subsequent suffocation may result from several causes.  A worker may enter a grain storage bin from the top to assist in moving bridged or clumped grain.  If the grain on top has been damp it may form crust creating an appearance sufficient to support the worker.  Invariably, when stepped on the crust will break through causing the worker to fall into the grain and become entrapped with possible suffocation.  “Escape by the victim is nearly impossible as a foot of grain covering a person in a prone position weights nearly 300 pounds,” indicated Mike Staton a

Michigan State University agricultural educator.  Gases given off by spoiled grain such as carbon dioxide or ammonia may also hasten suffocation when a worker enters a grain bin.

While the equipment has not yet been selected, Schiefer indicated it would most likely resemble a tub or series of tubes that would be placed around the entrapped person creating a barrier while the grain is sucked away.  Special oxygen equipment will also be acquired.  This equipment will aid during the rescue process as well.

Once acquired, the grain rescue equipment will be stored under supervision of the Bucyrus Fire Department.  All township volunteer fire departments throughout Crawford County will receive training in the use of the equipment.  Subsequently, they will have access to the equipment for grain rescue needs in their respective township.

“We appreciate receiving these needed funds to buy the grain rescue equipment.  We thank Monsanto for their generous contribution.  And, we can assure Monsanto that their funding will be used by Crawford County farmers for not only farm safety, but rescue efforts when needed,” stated John Schiefer.