Western bean cutworm populations on the rise in Ohio 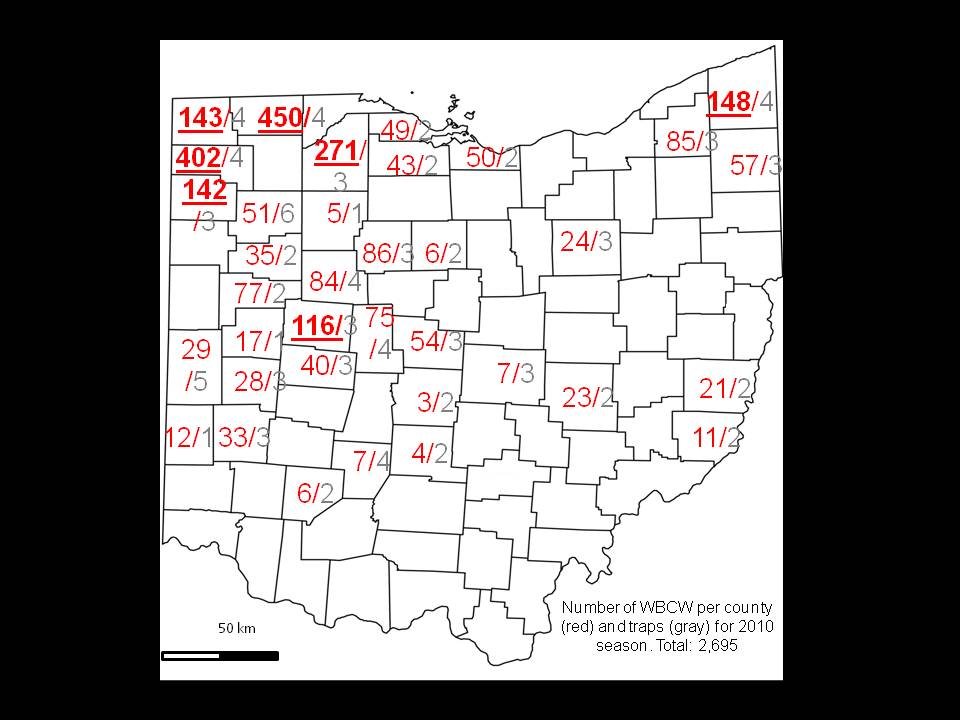 A staggering number of Western bean cutworm moths were trapped in Ohio corn fields this year compared to previous years, however, economic damage has yet to be recorded.

“The large increase of adult moths caught and the presence of the pest on infested corn suggests that producers will have to keep Western bean cutworm near the top of their list of important corn pests,” said Andy Michel, an Ohio State University Extension entomologist with the Ohio Agricultural Research and Development Center.

Western bean cutworm is a common pest of Western corn-producing states that is rapidly expanding eastward and finding a niche throughout the Midwest. The number of adult moths trapped in Ohio each year has been steadily increasing.

“The infestation of egg masses and larvae was light, but this just verifies that we won’t see this pest decreasing in the coming years, and growers will really have to start scouting for it each season,” Michel said.

The data suggests that Western bean cutworm will continue to spread across Ohio and increased feeding damage is likely. The larvae mainly feed on the corn ears, nibbling on the tips and boring into the middle of the ear, impacting kernel quality and affecting yields. Feeding damage can also create opportunities for disease development.

“Indiana saw damage in 2007 with economic damage following shortly thereafter. In Michigan, the first damage was found in 2007 and economic damage occurred in 2009. In Ontario, Canada, the first moth was caught in 2008, and the first damage was found last year,” Michel said. “Significant damage hasn’t been found yet in Ohio, but we know it’s coming. All the data suggest we’ll see some level of damage soon and it will most likely first occur in northwest Ohio.”

The heaviest infestations of Western bean cutworm moths have been found throughout northwestern and northeastern Ohio counties. Most of the moths were caught in northwest Ohio, with more than 400 moths collected in both Defiance and Fulton counties alone. The moths have been found as far east as Trumbull, Ashtabula, Belmont and Monroe counties.

Western bean cutworm moths emerge in Ohio as early as June with peak flight around mid-July. The adult moths lay eggs on corn plants with the larvae hatching out in mid-August and developing through September. They mainly feed on the corn ears, drop from the plant in the fall, overwinter in the soil and emerge as adult moths again the following spring.

Entomologists have established a scouting protocol for identifying egg masses, as well as a threshold for treatment.

“The best time to scout for egg masses is before the corn has tasseled. The females prefer pre-tasseled corn and once that corn tassels, they tend to just fly around looking for a suitable host,” Michel said.

When scouting for egg masses, inspect 20 plants at five different locations in the field. The economic threshold for treatment is 5 percent of plants that have egg masses or larvae.

“Timing of egg scouting is critical,” Michel said. “If you are over the threshold and need to apply chemicals, you really need to time it when the larvae are hatched but before they enter the ear. Once they enter the ear, they are protected.”

Growers can best find eggs in the top one to three leaves. Females tend to prefer laying eggs on leaves with a more vertical orientation. Eggs are in randomly clumped masses of 20 to 100. They start out white, turn tan and then finally turn purple.

“Once the eggs turn purple, you have about a 24-hour window before the larvae hatch,” Michel said.

Though the configuration and color of the egg masses is distinct to Western bean cutworm, the larvae can be confused with other corn pests, specifically corn earworm.

Michel said that the best management tactic remains monitoring for adults and scouting corn fields for eggs and larvae.

“While transgenic varieties with Cry1F (Herculex brand) are effective against western bean cutworm, this product does not provide 100 percent control like it does with European corn borer,” he said. “Furthermore, since we have not seen economic damage in Ohio, producers may not recover the input cost of the Bt trait at least until economic damage is reported.”

For more information on Western bean cutworm, log on to http://entomology.osu.edu/ag and click on the “corn” link.

Using enterprise budgets to help determine which crop to grow