A new “coffee shop” is born

A jingle announces when someone walks in the door and every head turns to see who it is. Golden oldies country music is playing in the background. Coffee is consumed by the pot and the food is good enough to accompany the bountiful conversation that flows freely, depending on who is sitting around the table.
Farmers have flocked to the local coffee shop for generations to learn the local gossip, talk about the weather and share their (often slightly exaggerated) crop yields. This is just the kind of place Bill Yeoman had in mind when he conjured up the idea of a new business for his Fayette County family farm.
The Yeoman family has been in the area since 1815 when their founder got a 1410-acre land grant for service in the Revolutionary War. In more recent years, the Yeoman family operation had evolved into corn and soybeans and freezer beef from an Angus herd.
“We had sold freezer beef for years and with all of the food safety issues we were seeing, we started getting calls about selling meat by the piece,” Yeoman said. “People have gotten afraid of their food and they want to know where it is coming from.”
In response, they got a label from the Ohio Department of Agriculture and began selling the beef by the piece, getting it processed in nearby Washington Court House. The calves are purchased from other farms right off the cow and fed grass and grain until they reach 1,000 pounds. They are then finished at a feedlot.
“We get as many compliments on our ground beef as anything,” Yeoman said. “When you start with a patty this big, you end up with a patty the same size and there is no grease to pour off.”
The success of the locally raised beef by the piece encouraged an expansion into other local products. The farm has since expanded to include locally raised pork, eggs, cheese, lamb, rabbit and other specialty meats. The business quickly outgrew the available facilities on the farm.
At the same time, Yeoman had the idea for an old-fashioned general store/coffee shop in the back of his mind.
“I had this idea brewing in my head for a while. We had all of this traffic from the nearby schools and the outlet malls and we’re just off a four-lane highway. On the farm I would watch all of this traffic go by and wondered how we could capitalize on it,” he said. “I finally told my wife about my idea and she thought I was crazy.”
Crazy or not, with the need for a larger facility for the local food business, and Yeoman’s dream of building a general store, the plans began to take shape. The ideal location was near the farm on Yeoman Road, but had to be purchased in 2009 and construction began in April of 2010. The new business, Buckeye Billy’s General Store, opened last November.
“We wanted this to be a nice community spot where people could come in and talk,” he said. “And we already have a group of farmers coming in the morning to drink coffee. I added a big harvest table for everyone to sit around so people could do that.”
The General Store serves breakfast, lunch and pizza for dinner and is open from 6 to 8 on weekdays and slightly shorter hours on the weekends. Visitors can also enjoy hand-dipped ice cream, deli meats and cheeses, a fall corn maze, a bakery and a wide array of convenience items. The facility, located at the corner of Yeoman Road and Old State Route 35, also has a shelter house for events.
In addition, Buckeye Billy’s features locally made furniture, arts and crafts including quilts, sewing, and candles.
“We wanted this to be diversified enough so that if one thing lagged in sales, we would be carried by everything else,” he said.
The Yeomans traveled all around the country visiting similar businesses to get ideas about what worked and what didn’t before they got started.
“We had a lot of brainstorming sessions before we even bought the property,” Yeoman said. “This place is kind of unique, I’ve never been in a place quite like this. There are not many places where you can get locally raised meat by the piece.”
The store is very handy for students and parents going to and from school to pick up something along the way.
“Kids come in for breakfast on the way to school and stop in for ice cream on the way home,” he said. “We have a lot of local support for this and a great customer base already. The big challenge now is get out name out so people know we’re here. We have done some advertising and we’ll get people coming from further away specifically to see what we have here, but we have people two miles down the road that don’t even know we’re open.”
In the future, Bill Yeoman, his wife, Jenny, and their two sons, Todd and Stephen are considering adding a farmers market, catering and even miniature golf.
“The possibilities are endless. We’re three miles from Walmart, we’re not trying to compete with them,” he said. “The place that draws in the farmers is going to be successful. If I go down the road and see a bunch of trucks parked somewhere, it is probably a pretty good place to be. Farmers like to go someplace to talk and solve all of the problems of the world. I want to be that place.”
For more information, visit www.buckeyebillysgeneralstore.com. 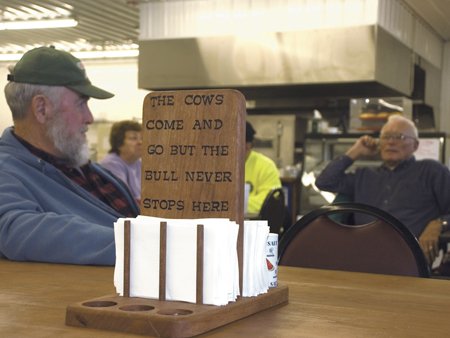