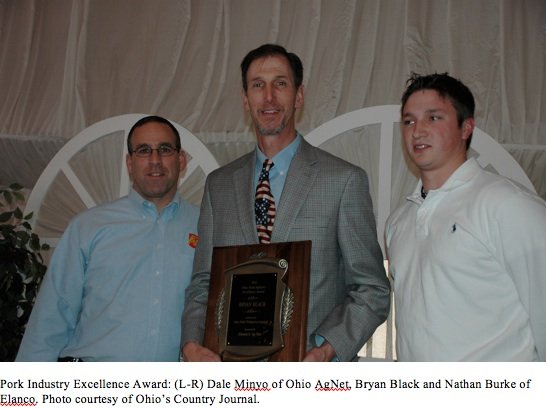 Bryan Black was recognized with the Ohio Pork Industry Excellence Award at the 2011 Ohio Pork Congress held in Columbus on Feb. 9. Black was selected for his tremendous contributions representing Ohio’s pork industry on the local, state and national level.

“We are pleased to recognize Bryan with this year’s Pork Industry Excellence Award for his involvement and leadership in not only Ohio’s pork industry, but also on a national level as well,” said Dick Isler, Ohio Pork Producers Council (OPPC) executive vice president. “He’s been instrumental to OPPC and his leadership remains of great value to our organization.”

He resides on the family swine operation outside Canal Winchester with his wife. They have two grown children. Black continues his extensive contributions by being a voice and representative to media and the community challenging Ohio agriculture practices.

The Pork Industry Excellence Award is given to a pork producer or pork producing family who has made an outstanding contribution to the swine industry.

Johnny Regula was recognized with the Ohio Pork Industry Service Award at the 2011 Ohio Pork Congress held in Columbus on Feb. 9. Regula was selected for his magnitude of support and dedication to the pork industry.

“We greatly appreciate all that Johnny does to be actively involved in Ohio’s pork industry and all the support he provided to our membership,” said Dick Isler, Ohio Pork Producers Council (OPPC) executive vice president. “The award is just a token of our gratitude for his continued commitment, whether that is volunteering his time or his willingness to promote Ohio’s pork industry and agriculture.”

He resides near Ostrander, Ohio with his wife Julie. They have two grown children.

The Pork Industry Service Award is given to a pork industry leader who has made outstanding contributions to the swine industry. 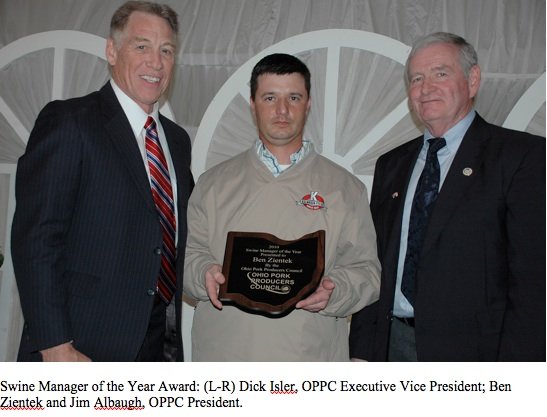 Ben Zientek was recognized with the Ohio Pork Manager of the Year Award at the 2011 Ohio Pork Congress held in Columbus on Feb. 9. Zientek was selected for his talent and experience in swine management.

“Ben is a steward of animal care and welfare,” said Lynette Holman, D.V.M for Kalmbach Swine Management, LLC. “He is a leader for all individuals that he works with.”

He, his wife Peg and daughter Addison reside in Liberty Center, Ohio. Zientek is actively involved in the community through his local FFA chapter, soil and water program and Farm Bureau group.

The Manager of the Year Award recognizes swine managers who excel in the management of a swine production operation.

Champaign County Pork Council was recognized with the Promoter of the Year Award at the 2011 Ohio Pork Congress held in Columbus on Feb. 9. This group was selected for the variety of events and activities encouraging the consumption of pork in their community.

For years, this group has been serving pork during the Champaign County Fair, and recently have expanded their facilities and created a permanent structure on the fairgrounds. The ‘Pork Barn’ stays busy throughout the fair serving delicious pork sandwiches and educating consumers about the pork industry.

The money raised by the Champaign County Pork Council goes back into supporting the pork industry through scholarships, fairground improvements in the swine area, youth and adult education programs and swine show promotions.

With 4-H and FFA hog shows exceeding one thousand entries each fair, this group showcases an opportunity to provide fairgoers a quality pork sample within close proximity of the swine shows. Great service and a quality product have enabled the Champaign County Pork Council to continue to grow and exceed their pork sales expectations during the fair.

The Pork Promoter Award is presented each year as recognition of an individual, family, organization or company who excel in promoting the pork industry on the local, regional or state level.