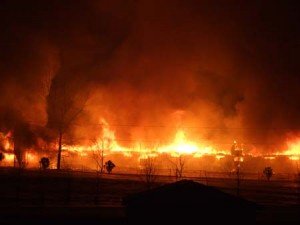 A fire destroyed at least one barn early Saturday morning at an egg farm in Licking County.

Firefighters from several departments were called to the Ohio Fresh Eggs complex, located near the corner of Croton and Benner roads in Johnstown, at about 6:30am

Several residents captured pictures of flames engulfing a barn there. This picture is courtesy of Leslie BeVier.

A company spokeswoman said a heater inside one of the barns may have started the fire, according to Columbus TV station WBNS.

The spokeswoman said no chickens were inside the barn and no injuries were reported.