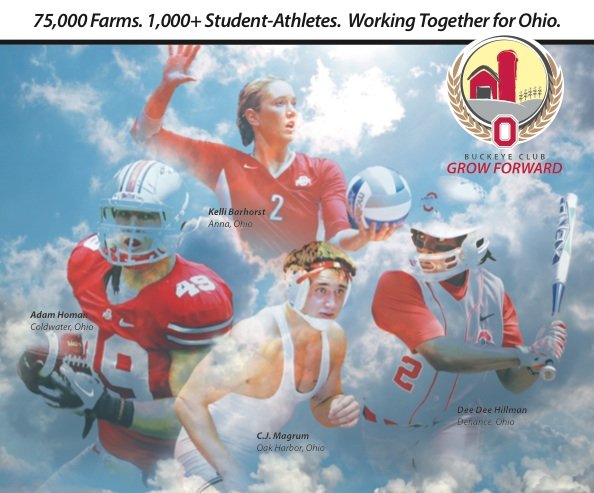 The Ohio State Athletic Department’s Buckeye Club has initiated a new program to engage one of Ohio State’s most loyal and passionate fan bases: Ohio Farmers. The “Grow Forward” program is a partnership between Ohio Agriculture and the Buckeye Club with an ultimate goal of fully supporting Ohio State’s student-athlete scholarship fund.

“The Buckeyes are Ohio’s team and we want to make sure rural communities are represented in the Horseshoe,” Jordan Birkemeier, Director of the Buckeye Club, said. “With our tremendous fan base inside the state, we want to make sure supporters know how they can make an impact on Ohio State student-athletes and receive access to season tickets. This initiative hopefully will educate people on how they can do both by joining the Buckeye Club.”

The Buckeye Club has partnered with four key organizations in Ohio to raise awareness of the Grow Forward program: the Ohio AgriBusiness Association (OABA), the Ohio Soybean Council, the Ohio Corngrowers Association and the Ohio Farmers Union. Each partner understands the value athletics has on our communities.

“Hard work, perseverance and toughness are just a few traits shared by Ohio farmers and Ohio State athletes,” Herb Mayer, OABA Chair, said. “The Grow Forward program provides a wonderful opportunity for Ohio farmers to help the future leaders of our state while they pursue their goals at Ohio State.”

People interested in joining the Buckeye Club can do so by making a minimum contribution of $1,500 either online or at any participating grain elevator.

“Joining the Buckeye Club at any participating grain facility is easy,” said Mark Sunderman, President/CEO, Deshler Farmers Elevator Co. “Simply request that $1,500 or more of your grain load be donated to the Buckeye Club and the elevator will process and send in your information along with your payment.”

By creating a trouble-free transaction, fans are able to make a sizeable impact on one of the 1,000-plus Ohio State student-athletes, while also receiving benefit access to football season tickets, team shop discounts & invitations to exclusive athletics events.

Here’s how Grow Forward works:
• A farmer or worker pulls a truck into grain elevator.
• The elevator manager asks what portion of the load the farmer would like to donate to the Buckeye Club.
• The elevator processes the sale and communicates the scale ticket to the new donor. They then communicate receipt information to both the Buckeye Club and the new donor.
• At the end of the month, the elevator will send Ohio State Athletics a check for the amount donated at the elevator with a report including each of the participant’s names, bushels, donated amount, and their contact information.
• The Buckeye Club recognizes the farmer’s charitable contribution and issues the farmer a season ticket application for the 2012 football season.
• Depending on the levels of bushels donated, the farmer may be eligible for benefits such as access to premium parking passes, walk-on golf course privileges and other exclusive athletic benefits.

Long-Standing Tradition
The “Grow Forward” initiative should not come as a surprise considering Ohio farming communities have been providing resources to The Ohio State Athletic Department for decades. Athletes such as John Havlicek (Martins Ferry), Jerry Lucas (Middletown), Rex Kern (Lancaster), Katie Smith (Logan) and Ross Homan (Coldwater) have all become Buckeye icons after transitioning from a small-town talent to an Ohio State legend. Based on this strong history, it’s easy to say that the Buckeyes have been blessed with a wealth of home-grown talent.

“I realized during my time at Ohio State that I was representing the entire state of Ohio. It was bigger than just Lancaster or Columbus. Being a Buckeye is about being the best representative of the people of Ohio,” says Rex Kern. “Growing up in a farming community taught me a lot of values that I carried on into my athletic and professional career. The people that devote themselves to agriculture have so much discipline. Discipline in how you take care of your crops and faith in knowing that the crops will take care of you. I find a lot of similarities between being a student-athlete and being a farmer. You reap what you put into it.”

Both large and small grain-elevators will be capable of processing Buckeye Club memberships. To recognize grain elevators’ support of the Grow it Forward program, participating elevators will be eligible for an incentive program that offers access to suite tickets, private tours, meetings with Athletic Director Gene Smith or OSU gift cards based on revenue generated.

In addition to grain elevator participation, the Grow Forward initiative is asking Ohio Agribusinesses to both promote the initiative and consider joining the Matching Gift program. Many current Buckeye Club members take advantage of a corporate matching gift option which doubles their impact on their preferred non-profit. Since most farmers do not have a corporate partner to match their donation, participating businesses will support both the most comprehensive athletic department in the country and their loyal customers. As Ohio State moves forward with its next priority, the Buckeye Club is once again asking for assistance from their great partners. By aligning Ohio agriculture with Ohio State Athletics, the Grow Forward program showcases the two most prominent names in Ohio.

In 2010, Ohio soybean farmers harvested 4.6 million acres, totaling $2.2 billion in production value. That is good for 6th nationally. Soybeans are used for a variety of purposes, including healthy oil for cooking, feed for livestock and poultry, soy biodiesel and many consumer and industrial applications.

In addition to soybeans, nearly 26,000 Ohio corn growers harvested 3.5 million acres of corn, producing a record crop of 548 million bushels with a value over $2.7 billion. Additionally, over 400 million gallons of fuel from corn were produced in 2010 by Ohio’s ethanol industry adding nearly $1 billion in value.

For more information about this initiative, please call the Buckeye Club at 614-247-1859 or access information online at ohiostatebuckeyes.com/buckeyeclub.