A late start to corn planting – Agronomic challenges ahead

Planting corn in 2011 has continually been hampered by frequent rain events that have dumped varying amounts of water across the Ohio region. According to the June 5 USDA Ohio cropping report, Ohio had 58% of the corn planted compared to the historical average of 99%. Of the 58% planted, 21% had emerged.  The late start to corn planting is not ideal and will present some unique challenges to corn growers throughout the growing season, but the late planting does not constitute a crop failure. Corn plants adapt very well to challenges and will produce the most grain as possible; the key to success is limiting the amount of stress the corn plant endures.

Late planted corn is more susceptible to weather stress than corn planted earlier in the season. Late planted corn is more likely to experience hotter weather during pollination and more moisture stress during grain fill. Therefore, making management decisions to limit the effects of stress will pay huge dividends in 2011. The areas of corn production growers can focus on to limit the stress exposure would be weed control, oxygen levels in the soil, nitrogen management and foliar fungicide applications.

The exchange of oxygen and carbon dioxide between the soil and atmosphere is critical for the growth and development of the corn plant. Normal soil conditions allow for the exchange of oxygen, but soils that have been pounded by continual rainfall can become sealed over and the exchange stopped. Corn that has been planted for some time and has experienced significant rainfall is probably sealed or crusted over and is lacking oxygen. If the corn field is sealed over and the corn plants are lethargic, consider running a knife style applicator through the field during the sidedress application. Pulling the knife through the soil will break the crust and allow oxygen to be reintroduced into the soil.

Growers who applied any or all their nitrogen preplant may want to consider sidedressing supplemental nitrogen to supplement nitrogen that has been lost due to the excessive rainfall.  The nitrogen requirements of late planted corn are 20% to 30% less than corn planted timely, but not knowing the exact amount of nitrogen that was lost could cause a potential nitrogen deficiency. Nitrogen deficiency puts corn plants in a high stress level during the critical grain fill period. By being proactive concerning the corn plants nitrogen supply a future stress can be eliminated.

Foliar fungicides are not normally thought about when yield potential is less than ideal. Typically, growers use a foliar fungicide to help boost yields on crops that look good. But new research and data continues to show that the use of certain foliar fungicides on stressed corn aid in the corn plants ability to better tolerate that stress. Stresses that fungicides can aid against include nitrogen stress, moisture stress and even heat stress. Applications should be considered either at the V5 growth stage and/or at tasseling to help the corn plant better mange stress throughout the growing season. 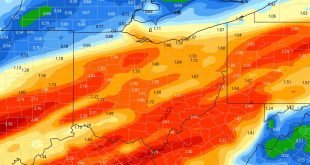