June 27, 2011 Between the Rows, Featured News Leave a comment

“We finished planting on June 8 with corn and beans both. We’re off to a very good start. We have near perfect stands in every field. They look beautiful, really, but they should since they were planted in June. The only kicker is that if it was three or four weeks earlier, we’d be sitting on top of the world right now. But for going in late, I guess we can’t complain. We’re close to that 8-inch mark on the corn that is at about the five-leaf stage. We should be close to knee high by the fourth of July.

“Wheat is kind of a sore subject around here. It looks pretty tough as a general rule. There is head scab and other disease in it. In May, we were wet and had a couple of big rains that killed wheat in the low areas. Wheat is not going to be very good around here. It is going to be very poor quality. I wouldn’t be surprised if by the end of the week we don’t see someone harvesting. The straw has a little green in it. It needs a little time, but with the heat coming this week it will speed that up.

“We’re 100% done with sidedressing. We use anhydrous and we pretty much dropped the planter and went directly into sidedressing. It went very well. The ground was dry and it sealed up really well. We couldn’t have been happier with the way it went. I would say 95% of the sidedressing is done early in this area. Ground conditions were good. Last year the corn was getting tall and we had trouble getting it sidedressed, so we got it done pretty quickly this year.”

The pest damage from earlier in the season has been slowed. “The cutworm damage is not as widespread as we thought, but there were areas in fields that were wiped out around here. There have been some early disease problems too.

“I think overall we’re looking good. It looks a lot better now that we don’t see the bare spots here and there. The corn is anywhere from over the waist down to a foot tall. It is a big range in height. Most people have wrapped up their sidedressing. We’re trying to get corn sprayed now. No one is spraying beans yet. We are planning on using fungicides again on a little corn and some of the beans.

“I think everyone is glad that they got the crops in this year. You think things look good, but then you think that it is almost July and not the middle of June. Everything will hopefully be alright from here on out, I hope.”

“We got all of the sidedressing done about five days ago. We should be able to finish up spraying corn the second time around here pretty soon. The weeds are not too bad yet, but the corn keeps growing and we keep getting rained out. We’ll be close on finishing on corn today, but it is still wet at the home farm and we may have to wait a couple of days yet. We’re waiting on bean spraying until they get a little bigger so they can close the canopy.”
Area wheat harvest has not yet begun, but may get started later in the week. “Some of the farmers are thinking about trying some of the wheat this week when the sun comes out. I haven’t heard about any harvest yet so I don’t know about disease levels or yields, but it does not look the best in some places.

“The corn and soybeans do not look too bad. The beans need a lot of sun, though, and a little dryer weather. Some of the corn is looking pretty good. We’ve got some of the early corn that is waist high, and some is not quite knee high.

“There are some guys still trying to get the first cutting done yet for hay, including my son. I kept him busy doing other things and he hasn’t had much time to work on the little bit of hay he does. It has been a drawn-out spring.”

There is also some armyworm scouting going on in the area, though no serious problems have been found yet. There have been some problems with gypsy moths stripping needles off blue spruce trees, though, and some follow up treatments to prevent more damage.

“We’re a little wet. We got a fair amount of rain last week. The wheat is not terrible, but even though we sprayed we’re seeing a little bit of head scab. Some of it got blown down with some storms we had. We’ll just have to see what it looks like when we get in it. I think it is a good week or week and a half out yet for harvest.

“I am out spreading urea on corn now. We wanted to use 28%, but the ground is still too heavy, and the corn is getting tall enough we figured we’d better get something on there. We’re spreading urea with AGROTAIN stabilizer on it so hopefully it will stay there and get to the roots. Ideally the anhydrous pre-plant is the way to go for us, but this year so far nothing has been ideal. So why start now? We have 60 acres to go and we’ll be done. Hopefully if we get a nice shower tonight like they’re talking it will work out well.

“The first corn we planted is chest high, so it is looking really good. Some of the early beans that we got in look pretty good too. The other beans are coming along and so is the corn. The wet spots got stressed a little bit and there were a lot of yellow spots in the cornfields last week, but that is starting to clear up and look more uniform. Most of the later corn is just a fuzz under knee high.

“We got some second-cutting alfalfa we’re going to mow down hopefully on Wednesday. We’ve got to spray some of our alfalfa for leafhopper that is not quite ready to mow yet. We’re keeping busy still. We got a little behind on the bean spraying and we’re getting some of that done now. All of the corn is sprayed.” 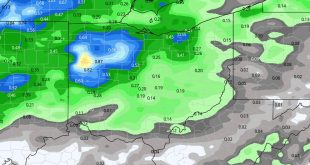 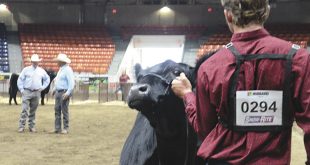 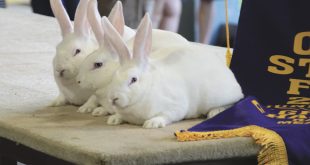