Just because we've always done it that way, doesn't make it right 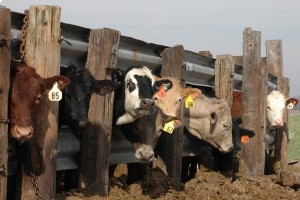 One of the great strengths and at the same time, great weaknesses of the beef industry in this country is the wide diversity of genetics that we have at our disposal to utilize in a wide range of environments. We obviously have a wide range of climatic conditions where beef is produced ranging from the cold winters of upper Midwest, the arid conditions of the western states, the plentiful moisture and resulting mud in the eastern Corn Belt, to the heat of the southern states. When you compare these varying conditions to the controlled environments that species such as poultry, swine, and in many cases dairy utilize, you can understand why we see much more variability in the look of cow herds across the country. It certainly makes the job tougher for the beef industry to produce a consistent product for the consumer.

Part of the environmental variability includes a wide range of forages that are produced from region to region. Here in Ohio as well as much of the eastern Corn Belt, much of our forage base consists of cool season grasses such as orchardgrass and tall fescue. A large percentage of the acreage in Ohio devoted to permanent pastures in Ohio is dominated by tall fescue. Tall fescue can be a valuable asset for cattlemen if you can capitalize on its particular strengths and minimize the effects of its considerable downside. Tall fescue is very responsive to nitrogen and can produce excellent yields. It stockpiles efficiently for fall and winter grazing and can tolerate adverse conditions and heavy animal traffic.

The majority of Ohio’s calf crop is born in a spring calving system. General observations and limited survey data indicate a peak of calving activity in February through April with fewer cows calving in January and May. Depending on your specific calving season, if you calve during these five months, breeding season can range from late March until late August. We are currently a bit past the halfway point for the majority of Ohio’s breeding season.

Consider what we put the brood cow through in a spring calving scenario. First, remember that spring and early summer is when endophyte-infected fescue is at its most toxic level. Seedheads are coming out in mid-spring and the greatest concentration of toxin is in the seedhead and stem. As calving season progresses, we send the cows out to the infected pastures and begin the breeding season through the use of herd bulls or artificial insemination during this timeframe when toxicity levels are at their highest. We are asking the cow to gain body condition, lactate, cycle and get rebreed when our forage when our forage is at its most toxic stage.

Now we must consider the effects of heat as we move into summer. A primary factor that reduces pregnancy rates is heat stress. Heat stress occurs when the body temperature is elevated for more than two degrees above normal for more than 48 consecutive hours. Heat stress reduces pregnancy rates by increasing embryonic mortality. Data provided by Dr. Les Anderson from trials at the University of Kentucky illustrated fetal death losses ranging from 5-25% depending on the level of heat stress. Another University of Kentucky research trial exposed three groups of cows to 45-day natural service breeding seasons. The seasons were early (4/21-6/5), typical (5/21-7/6), and late (6/19-8/4). Pregnancy rates declined dramatically as cows were bred later in the summer with pregnancy rates of 89% for the early group, 78% for the typical group, and 59% for the late group.

We cannot continue to utilize our typical production cycle in this state without making changes if we hope to maximize our chances for profitability. There have been several articles that have appeared in popular farm press outlets that have suggested we move the calving season to later in the spring or early summer to better match the animal’s nutritional needs to the typical forage growth curve and provide a better calving environment. These are valid arguments that can work in certain situations where the forages are cool-season grasses that do not contain the endophyte fungus, pastures with a high level of legumes, or areas with warm-season grasses. However, a typical calving season or one that is moved later on endophyte infected tall fescue can result in extremely poor reproductive performance.

So what is the answer to this dilemma? Given today’s high production costs, we simply must maximize conception rates and the number of calves weaned if we hope to have a chance at profitable beef production. There is little doubt that calving earlier will increase pregnancy rates but likely increase calf death loss. Calving later in the spring will provide a better calving environment but likely lower conception rates. In situations where the predominate grass is endophyte-infected tall fescue, I would recommend a move to a fall-calving season.

There are several reasons to justify a change of the calving season to the fall. Since tall fescue only heads out in the spring, toxicity is greatly reduced in the fall. Research has shown that the negative effects associated with the endophyte fungus declines over winter with cold temperatures. Calving in September and October provides a warm, generally dry calving environment. Grass pastures can be stockpiled to extend the grazing season into late fall and early winter. Breeding in late fall and early winter certainly avoids the heat stress issue. Fall-born calves can be marketed in the spring when prices are typically higher than prices seen in the fall months.

As with any management decision, there can be negative ramifications with a move to a fall-calving season. Moving a spring-calving herd to the fall by leaving the herd open for several months can be an expensive proposition. An alternate strategy would be to disperse the spring-calving herd and replace them with females bred to calve in the fall. Unfortunately, females bred to calve in the fall are not always available in large quantities.

Probably the most commonly heard complaint associated with a fall-calving herd is that calves will be nursing cows during the harsh winter months when feed requirements are at their highest. This is a legitimate concern if calves are weaned at a traditional age of approximately seven months. In this scenario, cows can become thin and calves can post substandard gains unless supplemental feed is provided. Early weaning of the calves at +/- 100 days of age can be a viable option to minimize the negative aspects of a fall-calving season by reducing the nutritional requirements of the cow and providing an environment for efficient gains for the calf, which should be around 4 pounds of feed per pound of gain, if a high-concentrate diet is fed.

There is no question that we are in the midst of one of the most economically volatile times that the beef cattle industry has ever faced. Market prices for all classes of beef cattle are extremely strong but input costs are at record highs. The cow-calf producer is always searching for methods to improve the chances of achieving profitability. Maximizing the number of calves weaned per cow exposed during the breeding season should be at the top of anyone’s list of production goals. Doing things the way we’ve always done them may not be the correct path to future profitability.

Brian Green, technical agronomist for Bayer, looks ahead to recommendations for 2023. He recommends taking …