It’s good to be the queen

Last spring, my family had the opportunity to meet the first ever Ohio Wool Queen, Elaine Leightey, and her husband Franklin, from Upper Sandusky. Leightey was crowned in 1955 as the first queen. It was fun for my wife to meet Mrs. Leightey because Kristin was the Ohio Lamb and Wool Queen in 1999 and is the current coordinator for the contest. Our daughter Campbell was extremely excited to meet the “Queen” and has royal aspirations as well, with hopes of one day being a Lamb and Wool Queen herself. All in all, it was a very royal afternoon.

Here are some very queenly photos and more about Leightey and the queen tradition she started. At the Ohio State Fair this weekend, 2010-2011 Ohio Lamb and Wool Queen Morgan Senath Melvin crowned Meghan Bennett, from Shelby County, as the next recipient of this honor. Judges at the Ohio State Fair will select the queen on Sunday, July 31 based on an application, interview and their answer to an impromptu question from a panel of judges live at the conclusion of the Guys and Gals lead competition. The queen is chosen for her personality, presentation, poise, knowledge of the Ohio Lamb and Wool industry and participation in the Guys and Gals Lead competition.

The queen tradition was started for the lamb industry in 1955 with Elaine Leightey, of Wyandot County, who served as the first Ohio Wool Queen. She had married Franklin Leightey, who raised Southdowns on his family’s Wyandot County farm.

The young couple quickly got very involved with the Southdown industry and had quite a bit of success in the show ring at the Ohio State Fair, including a couple of grand champions in the market show.

This success made young Elaine a strong contender for the new Ohio Wool Queen program that was being discussed by industry leaders at the time.

“I went to a Southdown picnic and was told about the new Ohio Wool Queen Contest and I was asked to apply,” Elaine said. “There were 21 other girls that had applied.”

As requested she sent a photo of herself in for the application and eventually got a phone call about her new role as queen. She was to be crowned at the following Ohio State Fair wearing a dress made from $50 in material for the occasion.

“Mrs. Banbury and Mrs. Judy made the beautiful dress for me,” Leightey said. “I wore that same dress for all of my events that year so I got a lot of use out of it.”

Elaine was crowned by Jane Lausche, the wife the Governor, and then was off on a whirlwind of events, duties and appearances as the first Ohio Wool Queen. She sold pelts in the Wool Room at the Ohio State Fair, did media interviews and appeared in daily parades at the Fair.

“Mark Judy made a float for me to ride on and Frank drove the tractor to pull the float around the Coliseum at the Ohio State Fair,” she said. “Larry Kauffman from Ohio State would announce the floats as they passed by. During the Fair, I stayed in an apartment in the Brown Sheep Building. Everyone was so nice and they made me feel special. A lot of people took my picture. I was escorted by police, with their sirens going, to an interview with the Channel 10 News. I showed Southdowns but I didn’t dare mention that in the interview because I represented all breeds.”

Though she did not hand out awards like the queens of today, the fame of her new role did allow her to rub elbows with celebrities including Neil Armstrong, two Ohio governors and even Phil Donahue.

After her experience as the first (and only married) Ohio Wool Queen, Elaine went on to more show ring success and to serve as the coordinator for Make it with Wool Contest in 8 counties. She also started a shop on the home farm for the sale of wool. She has never forgotten the experiences of that year so long ago. 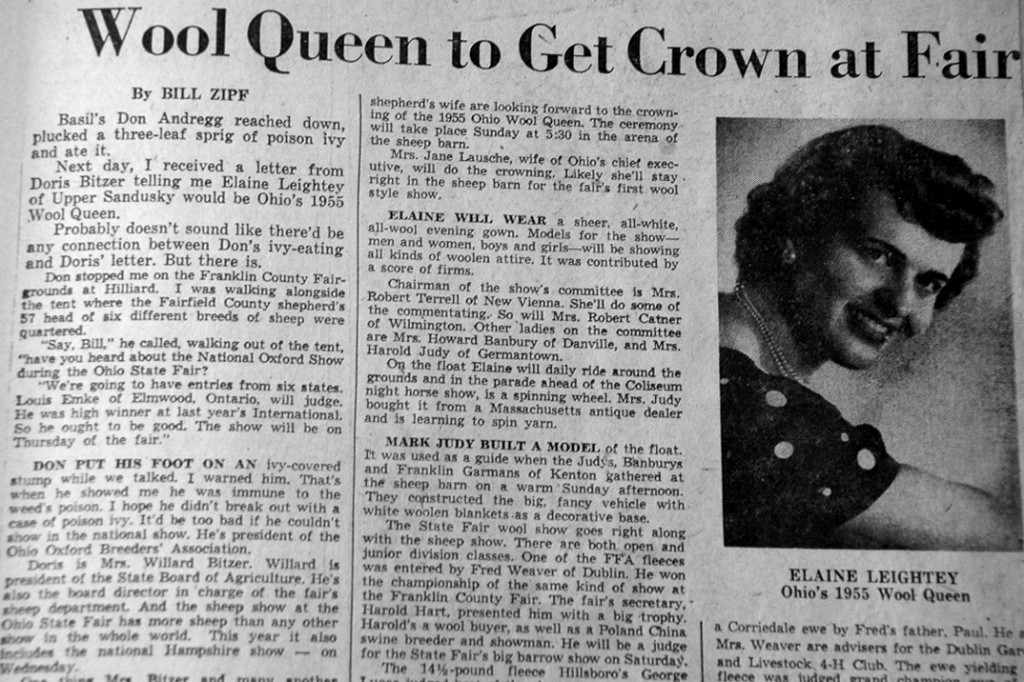