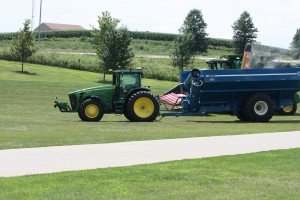 Kinze Manufacturing, Inc. unveiled an innovative solution to increase productivity on the farm — the Kinze Autonomy Project. The technology, which is the first of its kind in row crop production worldwide, utilizes autonomous agricultural equipment to complete many tasks on the farm with minimal direct human input.

“We’re excited to introduce the first truly autonomous row crop solution in the world on this scale,” said Susanne Kinzenbaw Veatch, vice president and chief marketing officer at Kinze. “This technology could be used to do a variety of tasks, including planting, nourishing, maintaining and harvesting crops.”

As a project more than two years in the making, Kinze performed extensive obstacle detection testing to ensure the accuracy and safety of the autonomous equipment. Beginning in a laboratory environment and then in the field, Kinze engineers simulated real-world scenarios to ensure the equipment would detect objects often encountered in the field, such as fence posts, stand pipes, farm animals and other vehicles.

The Kinze Autonomy Project is designed to reduce the need for skilled operators by taking the human element out of the tractor cab. Kinze will market this technology to help growers increase their productivity by allowing them to focus their time and attention elsewhere while performing cursory monitoring of the Kinze autonomous equipment.

“It’s our goal to help reduce grower fatigue and help them make the most of their harvest,” Veatch said. “As growers ourselves, we know how crucial it is to be productive during the short planting and harvest windows. With this technology, producers can set the equipment to run all night if necessary.”

The technology was originally developed in a laboratory setting using computer simulation. Kinze engineers partnered with Jaybridge Robotics, a firm in Cambridge, Mass., to bring that technology from the lab to the field, and to test and refine the work.

Kinze demonstrated the technology for their dealers today and is developing plans for the commercial launch to the market.