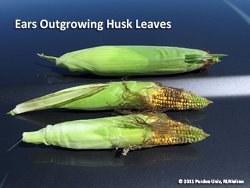 A period of extremely dry weather followed by later-season rain has left some corn with husks shorter than their ears, exposing kernels and portending reduced grain quality at harvest.

“Periods of severe stress can do all sorts of strange things to crops,” he said.

In the case of short husks and exposed ears, husk leaves are about two-thirds the length of the ears themselves and about half the size of husks on normal ears. Ear lengths of normal and stressed plants usually are similar, but kernel number and size tend to be smaller on stressed ears.

The main symptom farmers see is the ears elongated beyond the end of the husk leaves, which leaves kernels exposed to insects, birds and weathering. Damaged kernels are then vulnerable to fungal infection and ear mold development.

“If high percentages of ears are affected, overall grain quality can be compromised to the point that grain buyers may discount prices accordingly,” Nielsen said.

He said stunted husk leaves and exposed ears seem to be related to a combination of severe stress before or during pollination that is relieved in the initial weeks following pollination. For example, the most common combination of conditions resulting in ears outgrowing their husks is severe heat and drought stress followed by cooler temperatures and rainfall.

Stunted husk leaves are similar to what can occur in the whole plant when subjected to long periods of heat and drought stress, Nielsen said.

“The potential for husk leaf expansion and elongation seems to be permanently restricted, while the ear is able to continue elongation upon relief of the stress,” he said.

Unfortunately, once growers have identified underdeveloped husks, there isn’t much they can do about the problem other than use it to prepare for harvest.

“This is something to be looking at in the fields while making plans for harvest time and anticipating yields,” Nielsen said. “If growers see high quantities of exposed ears in the fields, they might consider making some different marketing decisions.”

Photos of underdeveloped husks are available at http://www.agry.purdue.edu/ext/corn/news/timeless/EarHusks.html.

Favorable conditions throughout most the week led to an increase in fieldwork activities, according to …