The House Committee on Agriculture’s Subcommittee on Livestock, Dairy and Poultry heard firsthand the challenges the livestock and poultry industries face today and expect to face in the coming years because of tight feed grain supplies. The hearing came on the heels of a U.S. Department of Agriculture World Agriculture Supply and Demand Estimates report that projected this year’s corn crop will be 417 million bushels lower than initial estimates.

“While U.S. corn usage for food and industrial purposes other than ethanol have remained relatively constant since 2008, the amount of corn used for ethanol has increased eight-fold, with three-quarters of that increase occurring since 2005,” said Steve Meyer on behalf of NCBA. Meyer is president of Paragon Economics, a livestock and grain marketing and economic advisory company in Adel, Iowa. “I realize we cannot ‘un-ring the bell’ on ethanol subsidies and tariffs but subsidized ethanol has meant record-high corn prices and record-high costs of production for meat and poultry resulting in lower per capita meat and poultry output. If you hear from anyone that the government should not be deciding on winners and losers, please realize that you have already done so.”

“It is a real possibility that next year corn will need to be rationed, and NPPC believes that rationing ought to be applied to all corn users, including the ethanol industry,” said NPPC Vice President Randy Spronk, a pork producer from Edgerton, Minn. “The ethanol industry is using more and more of the nation’s corn supply. This year it is expected to overtake livestock and poultry producers as the largest user of corn. But its growth has been driven almost entirely by the Renewable Fuels Standard mandate, which makes no provision for short corn supplies.”

“Included in this effort must be a ‘safety valve’ to adjust the Renewable Fuels Standard (the ethanol mandate) when there is a shortfall in corn supplies,” Harrison Poultry chief executive Michael Welch, speaking for the National Chicken Council, told the subcommittee. “In addition, a plan should be implemented to allow a reasonable number of good, productive cropland acres to opt out of the Conservation Reserve Program (CRP) on a penalty-free basis.”

“There is an immediate and legitimate concern about the availability and cost of feed ingredients due to the mandated use of corn-based ethanol. It has become clear, from the minute the government chose to subsidize corn as an energy source, that livestock and poultry interests have taken a back seat to the ethanol industry,” Ted Seger, president and part owner of Farbest Foods Inc., and past chairman of the National Turkey Federation. “While no one item is a silver bullet to fixing the low corn stock problem, we must do something to protect livestock and poultry producers from excessive high corn prices due to the fact that the government has mandated the use of half of the corn supply into the nation’s fuel supply. The Volumetric Ethanol Excise Tax Credit, or blender’s credit, is not required to support ethanol production and should be allowed to expire at the end of the year. Also, the Renewable Fuel Standard (RFS) should be reevaluated by creating a policy that provides a practical, automatic safety net.”

The National Corn Growers Association, however, reiterated that there will be enough corn to go around. In a statement, NCGA pointed out that many areas of the country saw a more difficult than average growing year for corn with record heat, floods and drought plaguing the Corn Belt. But even still, the U.S. Department of Agriculture still estimates the United States is on track to produce the third largest corn crop in history with a 12.5 billion bushel harvest. This is up substantially from even 10 years ago when production totaled only 9.5 billion bushels. In addition, the use of distillers grains, a high-protein livestock feed, has displaced almost 1.2 billion bushels of corn for livestock rations this year alone. 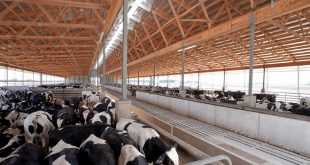 National use of livestock insurance products offered by USDA-RMA