Ohioans are reminded of the positive influence of the state’s grain industry in September as the month is designated as “Whole Grains Month.”

The economical impact of grains production, particularly wheat production, in Ohio is significant — $253 million is generated from this sector each year.

“Everyone is familiar with the nutritional advantages of whole grains, but no one stops to think about the businesses responsible for producing the staple grains that end up in our food,” said Doug Goyings , Ohio Small Grains Marketing Program Chairman.

Here are some Ohio Grains Production Facts to ponder:

Though much of the Midwest has experienced extreme weather conditions to threaten the viability of its grains production, Ohio is fortunate.

Nine hundred thousand wheat acres were planted the previous fall, an increase from 2010 and 52 million bushels harvested, which is an increase from 46 million bushels in 2010. The health of the crop depended on its location in the state, as the wet spring presented a challenge and added additional disease pressures on the crop.
“Overall, the wheat crop probably turned out better than expected recognizing the difficulties of our historic spring,” said Goyings.

Whole-wheat flour is rich in B-vitamins, vitamin E and protein and contains more trace minerals and dietary fiber than white flour. The fiber, like the fiber found in whole-wheat flour, is necessary for the digestive tract to function well.

Whole-wheat bread’s increased nutritional value is related to the whole grain. The whole-grain kernel consists of three parts. The outer layer of the grain is the bran, which has a lot of fiber and protein. Inside the bran is the germ, which is loaded with vitamins, minerals and essential fatty acids. The endosperm is the starchy area within the whole grain. For whole-grains recipes ideas, visit www.wholegrainscouncil.org 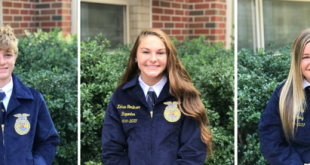