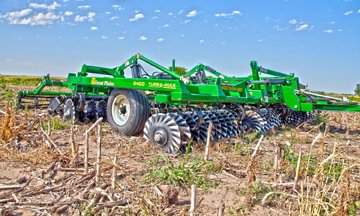 Great Plains was one of the first Ag manufacturers to produce vertical tillage tools when it began delivering the original Turbo-Till model back in 2002. A couple of years later a heavy-duty model went into production sporting thicker blades and heavy-duty gauge wheels. A Series ll Turbo-Till model was introduced in late 2007. The Series ll model boasted a stronger frame, greater weight per gang, and a beefier transport axle.

Fast forward to today and we have the completely new vertical tillage machine rolling down Great Plains state-of-the-art production line in Ellsworth, KS. Its name is Turbo-Max.

Turbo-Max has 2 coulter gangs like previous Turbo-Till models but with 7 1/2’’ spacing between each blade it has 25% closer blade spacing per gang. The 2 gangs are offset so the second gang splits the first – sizing residue to an impressive 3 ¾” laterally (the narrowest among major vertical tillage manufacturers).

The more innovative aspect of this new machine is that it has the ability to angle the gangs hydraulically on the go from straight to up to 6 degrees. “Adding the ability to angle the gangs gives vertical tillage farmers more options when preparing their seedbeds,” states Tom Evans, Vice President of Sales for Great Plains Mfg. “In the fall they can run the machine at an angle to bury more residue, which aids in the decay process and helps keep the residue from blowing away in high winds. In the spring they can run it straight to create an excellent vertically tilled seedbed that is perfect to plant into. Running it at 6 degrees offset helps level wheel tracks left from harvest as well as offering better weed kill than the previous turbo-till models which is something some of our customers have been asking for.”

The finishing attachment behind the coulter gangs is the company’s patented rolling spike harrow which completes the vertical tillage pass by leveling the soil while fracturing any soil not already loosened by the coulter blades.

The good news for farmers who love their Turbo-Tills and don’t need the new feature is that Great Plains will still be building the Turbo-Till in its latest form, but for vertical tillage farmers looking for options in residue, leveling, and weed control while maintaining a true vertically tilled seedbed, Turbo-Max looks to be a substantial leap forward in the evolution of arguably the country’s most popular vertical tillage tool.