The National FFA Association has an all time record membership announced at the National Convention in Indianapolis – 540,379 FFA members. Despite the increased competition from more FFA members from around the country than ever before, Ohio is holding its own in terms of national level competitors.

“One thing that the Ohio FFA is very excited about is that we have 14 national proficiency finalists this year, which is the most we’ve had in a long time,” said Leah Amstutz, the executive secretary of the Ohio FFA Association. “We also have the Ridgemont FFA chapter that did very well and we have several Chapters like the Fayetteville Chapter and the Versailles Chapter that will be recognized for being three star chapters in the national chapter award program.”

In addition, Ohio has a National Officer finalist with Amy Jo Frost and competitors in the National Ag Issues Forum and the speaking contest. The Ohio FFA state officer team was also lucky enough to travel to Indianapolis over the summer to help film the National FFA’s introduction video for the General Sessions during the National Convention.

The Ridgemont Chapter won in Chapter Development and we will keep you updated as more Ohio winners are announced. 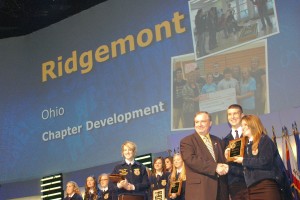 Ridgmont FFA was the national winner of the Models of Innovation award in the chapter development category.

December 5, 2022 -- Monday turns out fairly nice over ohio, but we may end up fighting more clouds as we move through the rest of the week...