Prepare for another cold winter 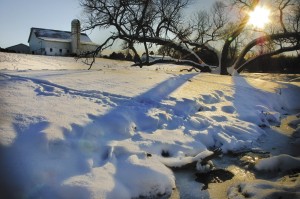 If you’re wondering how the weather might be shaping up for this winter, just think back to the last one and plan for that. The Midwest could be in for another rough one, depending on how weather patterns develop.

“There is a good probability that we could have the same thing that we had last winter,” Niyogi said.

Studies by the State Climate Office, based at Purdue University, show that typical effects from La Nina’s cool Pacific air are an autumn of drought, which was present until recently in some parts of the Midwest, and a transition to conditions colder and wetter than normal across the northern states during the second half of winter.

Farmers will be watching weather patterns closely over the winter. That is because effects from the last La Nina extended into June this year, bringing frequent rain that delayed planting of crops for a month or longer. That, in turn, is resulting in projections of yields lower than what would be expected with normal weather.

“If we have that again, that will be a thing to watch,” he said.

The North Atlantic Oscillation and its effects are difficult to predict because its cycle usually is shorter than that of La Nina. But they can extend over a season or longer, as they did last winter.