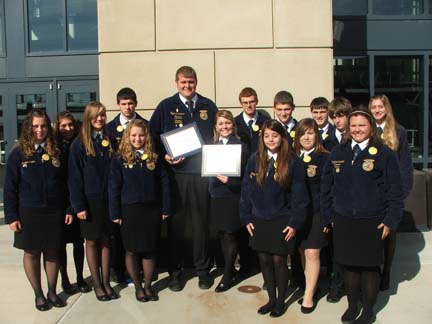 Blue Jackets took Indianapolis, Indiana by storm; October 19th through the 22nd. Over 50,000 FFA members from all over the United States met in Indianapolis for the 84th National FFA convention. The West Holmes FFA was among those who attended. The chapter members set out on their journey Wednesday the 19th with members from Smithville.  Along the way, the chapter stopped at Anthony Thomas Chocolates and saw parts of the chocolate making process, as well as getting to taste candy buckeyes! The next stop was at Bowman Superior Genetics, a shorthorn farm in Greens Fork, Indiana. During the tour, members got the opportunity to see a farm that isn’t approaching the usual feeding style. The farm owner, Phillip Bowman and his wife have turned to a liquid feed to replace corn; which brings down the cost of their total herd feed bill.  From the farm, the group continued to their hotel in Indianapolis.  Once arriving at the hotel, members got ready to attend the annual Buckeye Bash, in which Ohio FFA members from across the state meet and dance. The next morning, members woke up bright and early and attended the first session where Dave Roever, a Vietnam burn victim, was the keynote speaker. He talked about the importance of being who you are and people will accept you for that. He also reminded us of the importance of supporting the troops who serve our country. The second session honored Native American Indian tribes of the FFA. At the end of the day, members had the opportunity to go to the career/college fair and the shopping mall. After attending the career show and mall, members went and watched the entertaining hypnotist show and had the chance to see their own Ag teacher, Ms. Chenevey, be hypnotized by Dr. Jim Wand. On Friday, members went horseback riding at the state park in Indianapolis. Although it was cold, members enjoyed the morning trail ride. After the trail ride, we then went to Fair Oaks Dairy Farm, which is a major production farm and has over 30,000 cows. The farm also highlights agriculture in a positive way. It is promotional and educational farm that informs the public about the importance of dairy operations with its cow center, birthing center, and its cheese and ice cream shop. After the dairy farm, members went to an Elk farm and had the opportunity to eat elk meat for dinner. On Saturday morning, members were up bright and early to go to the American Degree session. West Holmes had two members receiving the highest degree awarded to FFA members; Cynthia Bunch and Tyler Schonauer. Cynthia currently attends college in Florida. Tyler is in college for Dairy Science at The Ohio State University ATI. Congratulations to Cynthia and Tyler for receiving their degree. Members who went to convention were Clay Armstrong, Matt Schlegel, Atlee Miller, Beth Klein, Megan Miller, Mandy Taylor, Gretchen Straits, Brittany Crawford, Mitch Ling, Shyann Kick, Meghan Dawson, and Elizabeth Overholt. While there, members enjoyed attending convention and seeing a sea of blue and gold; an experience like no other.