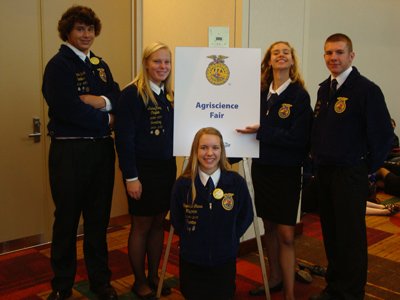 During the recent National FFA Convention in Indianapolis, five members of the Zane Trace FFA Chapter had the opportunity to participate in the National Agriscience Fair.  These members earned their entry into the fair by placing first and earning gold ratings in the Ohio Agriscience fair held in May.  The members competed in areas of Botany and Microbiology/Biotech/Food Science with their research projects that they conducted as a part of their supervised agriculture experience program through their agriculture classes at Zane Trace.

After the judging was completed, the five students attended an Agriscience awards brunch sponsored by Dow Agrosciences, Monsanto and Syngenta.  During the brunch, results of the competition were announced.  David Glass and Audrey Hoey were the top placing students out of the group, receiving 2nd place and a gold rating in the Botany Senior Team division.   Stephanie Glass and Jessie Proehl also received a gold rating on their project in the Food Science/Biotech/Microbiology Senior Team division while Beau Bilek earned a bronze rating in the Botany Junior individual division.  All members gained valuable experience through their participation in the event and made friendships and contacts with students and professionals from across the United States. Each of the students involved in the event plan to improve their research and compete in the Agriscience fair again next year.