I was about 4 years old when I sat on my first horse. Mom and Dad took my brother and me to a local rodeo and horse show. An uncle and several other local cowboys and cowgirls competed in various events from rough stock to wild cow milking (my uncle’s event) to various pleasure horse and youth classes.

As my family and I walked around the grounds, I was fascinated by the horses and, as far as I was concerned, REAL LIVE COWBOYS! Even at 4 years old I was quite a fan of Roy Rogers, Gene Autry and the myriad of TV Westerns that were on the air in the 1950s.

Among the contestants were local friends, Virgil and Nellie Hardman. Virg’ was a roper and Nellie, as I recall, showed horses in a “pleasure” class. When we saw them, Mom and Dad stopped for a chat, which gave my brother and me a chance to get up close and quietly pet the horse.

“We can do better than that” said Nellie. “Come on up here and let’s take a ride!”

With that, Dad lifted me up into the saddle in front of Nellie and off we went, riding around the grounds, waving and talking to other cowboys and friends as we went. I was ecstatic and still remember the smell, the sound of creaking leather, and the gentle rocking of the horse as we walked around the rodeo grounds. From that point on, for every birthday or Christmas, I’d tell Mom all I wanted was a pony. It grew to become a family joke. She asked me once when I was in high school, “Kirby, what would you like for Christmas this year … besides a pony?”

Mom passed away in 1991 after a long, hard illness. It was a hard year for all of us.

That first Christmas after Mom died, I came downstairs early and put on a pot of coffee. I went to the living room to make sure everything was ready and that the room looked as magical and colorful as possible. It wasn’t long before I heard little footsteps running through the hallway upstairs, my cue that the best part of the holiday was about to happen — seeing the kids’ faces as they rounded the corner into the living room where the tree, candles, garland, lights and the spoils of Ol’ Saint Nick would be waiting.

My wife, Kim, and the kids, Christian and Morgan, were gathered at the top of the stairs waiting for my signal that it was time to come down and see if Santa had remembered them on Christmas Eve. I poured a fresh cup and returned to the bottom of the stairs where I could see my kids giggling and squirming as if they had to pee in the middle of Sunday school. But Kim held them in check until I declared, “Somebody’s been here!. And it looks like whoever it was, left an awful lot of stuff under the tree.” With that, the kids came swooping down the stairs like Dorothy’s winged monkeys.

Our family’s Christmas ritual was to let the kids see what Santa had brought and let them discover and play for a bit. Then we would head to the kitchen for breakfast before opening our gifts to each other. Now, ham and eggs, Cap’n Crunch and orange juice are about the last things on a child’s mind on Christmas morning. Still, Kim and I would make sure they ate all their food if for no other reason than to prolong the excitement and mystery of the impending gift exchange. Finally we would designate one of us to be “Santa” and pass out the gifts that couldn’t be opened until all the presents were passed out. That year Kim got to wear the Santa hat.

After a couple of hours of shredding wrapping paper, shrieks of joy and probably way too many candy canes, the morning was about over. It was then that Kim motioned to Christian who crawled his way toward the corner in back of the tree and said, “Daddy, I think Santa brought something special for you too!”

He crawled back to me with an extremely odd shaped package. On the package was a note that said, “You’ve had a tuff year so we wanted to do for you what your mother would have done if she could. Merry Christmas … love us.” As I tore off the paper, I couldn’t believe what I was seeing. There was a plastic tub and inside it was a halter and lead rope, a pair of spurs, a curry comb and assorted paraphernalia made for grooming a horse. 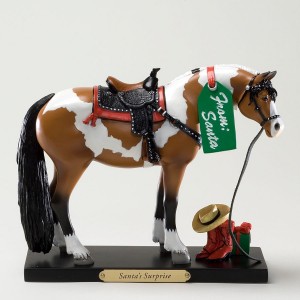 “You can have your pony now,” said Kim, smiling as she gave me a hug and the kids ran up to join in. I almost cried.

I grew up worshiping cowboys and horses. From my wild cow milking uncle to every television and movie cowboy that ever vaulted onto his horse or packed a 6-shooter. I knew the names of every horse that galloped across the TV screen and lived for any chance at all to get to ride. And while other kids were playing baseball, I played cowboys and Indians. We lived in town so I had to depend on cousins and friends to get to ride, but always managed to ride at least a few times a year. I never got over my love of horses and cowboys and all that went with them. And as clichéd as it might be, I really did grow up dreamin’ of bein’ a cowboy. It’s all I ever wanted to be.

Eventually I did. Five years after that very special Christmas, I took a job as director of marketing for the National Cutting Horse Association and moved my family (including new baby Quinn) to Texas, where, for the next 12 years, I rode, roped (poorly), worked cattle and competed in cutting horse shows throughout Texas. I won a few buckles along the way and remember telling Kim once in the midst of all that “cowboyin’,” “Ya know? I could die now and be perfectly content with my life. Thanks to you I’ve realized a dream that I never thought possible.”

So, here’s wishing everyone the best of the holiday season and that your dreams are fulfilled. As for me, I’ve been blessed. But even today, so many years later, I still look for another odd-shaped package and remember that one special Christmas when I finally “got a pony!”