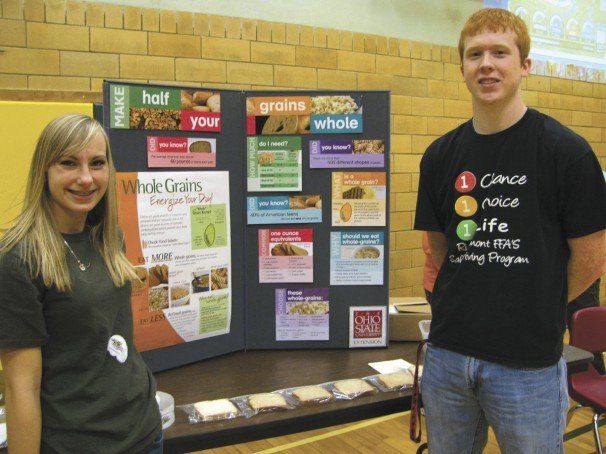 The Ridgemont FFA responded to the challenge by responding to a newspaper headline in their community: "Hardin County Schools Have the Highest Obesity Rate of All Third Graders in the State of Ohio."

The Ohio Small Grains Marketing Program (OSGMP) teamed up with Mt. Gilead teachers, administrators and FFA students to improve awareness about the importance of nutrition. The result is the Food for  Thought Challenge.

The nine participating FFA chapters will make presentations at the Ohio FFA Convention next May and the winning chapter will receive $2,000 from the OSGMP. Participating FFA chapters submitted campaign entries in September and were selected in October based on the originality of their campaign ideas. They were each given $500 from the OSGMP to develop their campaigns.

The Ridgemont FFA responded to the challenge by responding to a newspaper headline in their community: “Hardin County Schools have the highest obesity rate of all third graders in the State of Ohio.”

The FFA chapter identified partners in the school and

community to assist in their efforts to reduce obesity. Now more than 80 students in the small school are involved in this effort that includes goals of establishing a community advisory committee, an elementary outreach day, a monthly electronic newsletter, the addition of tasty whole-grain choices in the school cafeteria and a Facebook page. In addition, the students purchased a lamination machine to make life-sized posters for their campaign and the math department at the school is developing surveys to measure changes in attitudes and behaviors towards healthy eating. The Ridgemont effort has also received funding from the State Farm Youth Advisory Board and Fuel Up to Play 60 Campaign, a program launched by the National Dairy Council and the National Football League that encourages good nutrition.

Ridgemont, Mt. Gilead and the other participating FFA Chapters will be working hard through the winter months leading up to their presentations at the Ohio FFA Convention this spring.

“Right now the students are in the competition phase so there hasn’t been much interaction between the groups yet, but we are starting a newsletter to update all of the chapters involved on progress reports from around the state,” Warkentien said. “Then they will all get to meet at the FFA Convention and share their ideas.”

In the meantime, the various projects will be monitored and considered for broader applications around the state moving forward.

“The schools’ progress will be monitored throughout the year as they launch a program in the school. The winner that can best show that they changed attitudes and behaviors in their district will win the award,” Warkentien said. “We think interest will be even higher next year. It is kind of fun and it has gotten kids working within their own districts and they are reaching out to younger kids in the district as well. Kids can be very innovative and creative and they are going to come up with a lot of ideas that can be shared around the state.”