Yikes! Farmers around the state have been learning of the increased in land values and the resulting increases in the taxes they owe on that land. But, before muttering too loudly about the sharp rise in their taxes on re-assessed land, farmers need consider the amount of money they are saving through Current Agricultural Use Valuation (CAUV). It is CAUV enrollment that has allowed for only a “Yikes!” in the place of a “YIKES!!!!” 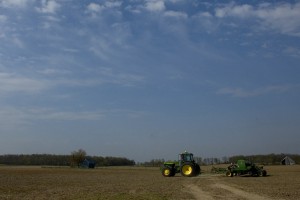 Nonetheless, there have been plenty of questions about the shocking rise in taxes in recent years.

“We’ve been spending quite a bit of time talking to farmers about CAUV and the increases that people have been seeing,” said Chad Endsley, director of agricultural law for the Ohio Farm Bureau Federation. “CAUV values are determined for each of about 3,500 different soil types in Ohio by a formula that is administered by the Ohio Department of Taxation. The formula uses the following factors: crop yields, crop prices, cropping patterns, other non-land production costs and a capitalization rate based upon interest rates. Right now we have yields that are increasing, crop prices at record or near record highs, expenses that have been increasing but not at the same rate as crop prices, and interest rates at historic lows. As a result, CAUV values have increased substantially. You notice that increase even more so because the tax values are updated every three years. Rather than seeing incremental increases every year, you only see a change every three years, which makes that change much more significant.”

Though the increase may be shocking, Ohio’s farmers still enjoy tremendous tax breaks on their land compared to most other landowners in Ohio and farmers in other states.

“I think that Ohio still has one of the strongest CAUV programs in the nation. In many other states, they simply would apply a reduction to whatever the fair market value would be. Maybe it would be a 50% reduction of the fair market value. In Ohio, in many counties, farmers are actually paying much less than 50% of what they would be paying if their land was assessed at its fair market value,” Endsley said. “You can actually go to your auditor’s office and find out what your land value would be if it were taxed at fair market value. You can calculate what you are saving because you are enrolled in the CAUV program. I think you will find that even with the increases that you have been seeing — even if it’s a 100% to 200% increase of your CAUV value — you’re still getting a significant savings.”

It is also important to remember that there are plenty of folks out there who would like to see CAUV weakened or eliminated. Ohio has a long history of CAUV battles in the courts.

Farm Bureau filed an amicus brief in the case explaining the history of CAUV and the value of conservation programs in agriculture.

“We believe that it is authorized by the Ohio constitution to allow land enrolled in conservation programs to remain in CAUV,” Endsley said. “And, if that policy needs to be changed, it needs to be the General Assembly that makes those changes rather than the courts. We will continue to fight to protect CAUV in Ohio.”