RFS a top priority for U.S. ethanol and corn industries

The oft-maligned Renewable Fuel Standard (RFS) that mandates increasing levels of renewable fuel use in the U.S. is the topic of hot debate between some livestock and crop organizations.

Livestock and poultry organizations claim the RFS drives up feed costs, but Bob Dinneen, the CEO of the Renewable Fuels Association, does not mince words about the value of the RFS and the ethanol industry’s contributions to the economy and the livestock industry.

“We produced almost 40 million tons of DDGs last year, that is a significant portion of the total feed demand in this country,” Dinneen said. “The RFS has been a tremendously successful program. People have invested in the RFS. The worst thing in the world would be for the government to come in and change the game. Business cannot create jobs if Congress comes in and changes things all the time. We have to make sure that RFS stays in place. Period. End of discussion. This has been the single most successful energy program the country has ever had. Repealing the RFS would be monumentally stupid.” 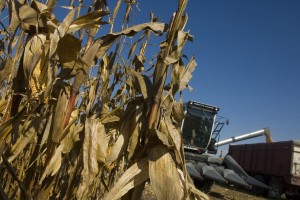 The proposed RFS Flexibility Act of 2011 would change the game by basing the RFS requirements on the U.S. corn supply inventory. RFS supporters point out that current law already has a safeguard permitting the U.S. EPA to temporarily reduce the required level of corn in an emergency situation.

Dinneen said the RFS also supports investment in advanced cellulosic ethanol development, while decreasing the cost of a price of gasoline by 90 cents a gallon. The RFS is making progress in reducing dependence on foreign oil as well.

In other ethanol news, Dinneen talked about the possible timeline of E15 blend availability at fuel stations around the country. Dinneen has been working closely on the E15 implementation process with the U.S EPA and speculates that the new ethanol blend could be commercially available for 2001 or newer vehicles as early as this spring at some fuel stations.

“It is going to be slow growth based on economics, but we think it will grow,” he said. “It will happen organically. It is just going to take this time.”

Looking further ahead, Dinneen sees the potential for higher ethanol blends being advocated by the auto industry as engines are retooled to maximize gas mileage while minimizing emissions to meet future Corporate Average Fuel Economy (CAFÉ) standards. A new study revealed that ethanol provides the higher-octane these high-efficiency engines require. Ultimately, the auto industry may push for blends as high as E30 to meet the optimal octane levels.

“Implementation of the CAFÉ standards will require auto manufacturers to decrease carbon dioxide emissions while increasing fuel economy to 54.5 miles per gallon,” said Chad Willis, National Corn Growers Association Ethanol Committee Chairman. “Considering this data, it becomes increasingly evident that ethanol offers an important tool to help meet this challenge. Prior to the study, we understood that ethanol was part of the solution. Now, we know that it holds even more potential for helping meet our energy goals.”

Which, to complete the circular ethanol argument, is one more argument for maintaining the RFS and a strong ethanol industry.