Back in the 1950s, the $12-per-acre going rate for land in Adams County caught the attention of Frank Bauman. The land prices were low enough to entice him to move from

his home in Indiana and settle down on 400 acres among the rolling hills of southern Ohio. For years after that, tobacco was the main focus of the farm, with Angus cattle and other crops as well.

This, of course, has changed in recent years. The farm’s tobacco production acreage has steadily declined since it was up to 61 acres in 2001. Since then, Frank, his son, Kent, and daughter-in-law Joy, have been transitioning the farm to a focus more on the registered purebred Angus seedstock that has been a part of the farm operation since 1956.

“We have been able to build our herd through cost-share assistance from the Southern Ohio Agricultural and Community Development Foundation (SOACDF) with grants for our farm over the last 10 or so years that have helped us grow our herd and expand that business by building a new calving barn and buying new equipment,” Joy said. “This has allowed for the increase in herd size. At the time when the SOACDF was formed, approximately 66% of the farm income was from tobacco sales.”

Since then, tobacco sales have dropped to about a third of the farm’s total income while cattle sales have increased five-fold. The Baumans’ Turkey Run Angus Farm now has 140-head of registered Angus brood cows including 30 bred heifers and 40 replacement heifers from the 2011 calf crop. The Baumans were recently recognized by the Ohio Cattlemen’s Association with the Seedstock Producer of the Year Award.

Through the SOACDF programs and cost-share funding from the farm, the Baumans added a calving barn with a maternity pen, automatic waterers, gates, a silage bagger, a livestock trailer, electronic scales and a forage box in 2005. In 2008, a hay storage barn, discbine, TMR mixer, and additional cattle were added with grant funding. SOACDF grant funding has also assisted with the construction of high-tensile fence, a cattle chute and a grain cart on the farm.

With great facilities in place, Turkey Run Angus Farm is pushing forward genetically with the addition of new Angus females to build up the herd size to meet farm goals.

“We’re really performance minded. We’re looking for cows that are going to produce a calf with a good carcass for producers,” Joy said. “We’re using Expected Progeny Differences (EPDs) to evaluate for birth weight, weaning weight and other traits.”

And, for the first year, the Baumans are using ultrasound technology to generate carcass-value EPDs for the cattle sold from the farm.

“We’re doing ultrasounds on our yearling heifers and bulls. We’re taking yearling weights also,” Kent said. “This helps with our selection tools in deciding which females and males are best with their carcass traits. The yearling weights will figure into their EPDs. We try to select a combination of lower birth weight while retaining rapid weaning weight and yearling weight growth with moderate milk. We try to push the carcass traits as much as we possibly can. We try to promote the ribeye, with lower back fat and more intramuscular fat to get into that choice grade as much as possible.”

The move toward EPDs is the result of increased interest from Turkey Run Angus customers.

The bulk of the cows sold from the farm are marketed though the Turkey Run Angus Farm Turn Out to Grass Sale held the first Saturday in April each year at the Union Stock Yards in Hillsboro. In the past four years, sale averages have been about $1,850 per lot.

“We sell mostly females and of the 50 or so lots, around 30 are first-calf and second-calf heifers,” Kent said. “We try to provide our customers with good maternal stock that can go into their herds and have a long productive life.”

Twitter and Facebook are becoming increasingly important in the overall marketing plan for the farm. The farm has also been reaching out to customers and the cattle industry through a new website (www.turkeyrunangus.com), direct mailing and advertising in local media.

Breeding with artificial insemination starts in April and May. The cows are each artificially inseminated once and, if they subsequently show signs of heat, they are served once more before being turned in with the herd bull. Most of the calving on the farm is in January and February, which typically takes advantage of the frozen conditions. The warm, wet winter has created a number of challenges.

“I think I’m going to rename the place muddy acres,” Kent said. “It has been a wet year and a struggle all the way since last spring.”

Tobacco is still grown on 34 acres of the farm. The Baumans raise their own tobacco seedlings in a greenhouse float-bed system, and also produce around 30 acres of seedlings that are sold to other tobacco growers in the area. Corn is grown on 240 acres for grain and silage production and there are around 200 acres of hay and pasture. In the winter, the cattle are fed a mixture of 90% silage and 10% ground hay.

“We feed everything with a scale and we know exactly how much we’re feeding,” Frank said. “It takes about 20 minutes to grind the hay. We’re grinding every other day. By grinding the hay, we get much less waste and it is much more digestible for the cattle. We’re gaining 5% to 8% more feed efficiency by grinding the hay.”

Grain is added to the mix for the first calf heifers and cows in need of additional condition. Any cattle that are potential carriers of genetic defects including curly calf, hydroencephalytis, and fawn calf are DNA tested. All of the cattle on the farm are vaccinated for Leptospirosis, Pinkeye, and Pasteurella haemolytica. They also receive a standard 4-way cattle vaccine for IBR, BVD and Pi-3 twice annually. 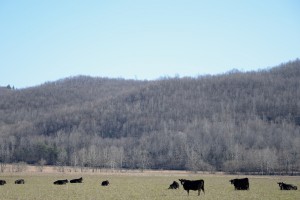 day farm operation as well. The girls help with daily chores of feeding and bedding the calving barn, as well as assisting with moving cattle between farm locations throughout the calving season.

The Baumans have come a long way from the 400 acres of $12 hill country in the 1950s to a modern, productive farm using cutting edge technology to improve the quality of the Angus herd in the region. The cattle business and the land prices have changed substantially, Frank said. “The biggest mistake I made back then was that I didn’t buy more land.”