White mold and other diseases a concern after mild winter

While there were some run-ins with the full wrath of Old Man Winter in the past few months, by in large, it has been a mild season. The wet and warm weather through much of the winter has plant pathologists concerned about the possibility of diseases this growing season. 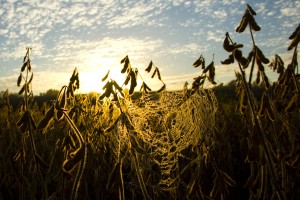 “Ohio is known as the replant state and that is not going away. As these soils have remained saturated, all of those soil borne organisms are there primed and ready to go,” said Anne Dorrance, Ohio State University Extension plant pathologist. “When we try to extract these pathogens from the field, we have them incubated in cool temperatures. The longer we incubate, the better disease we get. We have had a winter that has mimicked exactly what we do in the greenhouse to recover these pathogens from the soil.”

Understanding the disease history in the field will be important this season.

“Our biggest concern is fields that have a lot of residue. Those are perfect areas for all of those residue borne diseases like frogeye leaf spot and brown spot on soybeans and gray leaf spot and northern corn leaf blight in corn. All of those are having a very easy winter. If you had problems the year before with those pathogens, they are going to be ready and primed to go if you plant those same hybrids and varieties in those fields again this year. Really looking at where you plant what hybrid and variety is going to be a key to success this year.”

White mold is another soybean disease that farmers need to be prepared for this year, which can be addressed through resistance.

“The most important decision a producer makes is variety selection. I know how tempting it is to just go in and pick the highest yielding line but that is really not the best way to start,” Dorrance said. “Guys know which fields have a history of white mold. It tends to re-occur when the weather is right. The inoculum is there and if they choose the right variety, they can mitigate a lot of their losses right from the start. Choosing the varieties with the highest levels of resistance makes a huge difference at the end of the season.”

White mold thrives in cool temperatures ranging between 59 and 75 degrees Fahrenheit and moisture-rich soil conditions caused by heavy spring rains. According to Sam Markell, Extension plant pathologist at North Dakota State University, the dense soybean canopy can stay moist until the late morning hours, which creates an ideal environment for the disease. Infection occurs when the white mold ascospores released from the white mold pathogen land on senescing flower petals, then germinate and form mycelium.

“The spores are generally unable to infect the plants directly, but can easily digest the senescing flower petals,” Markell said. “Shortly after the infection occurs, the fungus will form a lesion, causing significant damage to the plant and disrupting nutrient uptake.”

After that, portions of the plant stem, above the area or infection, die and dry up. The disease then hollows out and shreds the stem at the spot of the lesion. At this point, the plant is non-productive, and possibly dead, which causes significant yield loss and leaves sclerotia in the soil for years to come.

Dorrance said that the losses could really add up under Ohio’s typical growing season if white mold gets an early start.

“For every 10% disease incidence, there is a 2- to 4-bushel yield loss. You can have quite a bit of white mold in the field before you are really hit,” she said. “The caveat is that it really depends on when the disease gets started. If we’ve got early infection, that yield loss is going to be greater. Last year, it was so hot that the infections didn’t occur until later in the season and we saw more disease on the outside of the branches and the loss wasn’t as great.”

“The first thing is to start looking at the fields when they have canopied just before flowering where they are planted the thickest. If we get rainfall during the flowering period, go in about two weeks later, part the canopy, open it up and you’ll see that white, fluffy, almost frosty white mold on the stem,” Dorrance said. “Last year when we went in right after flowering, we didn’t see it because it was so hot and the fungus just sat there on the blossoms. In the advanced stages, you can look out across the field and see a few grayish green plants and those are the plants where you’ll find the mycelium on the stems.”

There are fungicides available for treating white mold, though some (such as Cobra) have secondary effects that contribute to yield loss due to the late application time while others only reduce disease levels slightly based on some data from other states, Dorrance said. Reducing plant populations to less than 160,000 plants per acre and 15-inch row widths can also help control white mold.