“One of a kind” is becoming an overused phrase, but for Ohio farmer John Wilson it is a phrase that rings true when it comes to the planter he is using this year. The German-engineered Horsch planter rolling behind Wilson’s tractor is the only one east of the

Mississippi River and one of only a handful being used in the United States, so far.

“It something a bit different,” Wilson said while planting soybeans in a Madison County field . “Horsch seems to be more precision-minded in their technology. They are very adamant about spacing and not getting doubles and it looks to be doing the job. We’ll see when it comes up.”

Curiosity from other farmers has prompted many phone calls and questions about the Horsch planter and Wilson’s is happy to answer them.

“Horsch is not new to the industry,” Wilson said. “They’ve been building planters for many years in Germany using Kinze units, but this is one of the first that they manufactured on their own.”

They must know what they’re doing because the Horsch Maestro planter Wilson is testing out recently won the honor of being named “Machine of the Year” at the largest farm show in Germany. 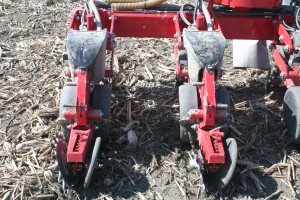 This unit can be used for all types of single grain seed and includes a “Seed on Demand” system for short filling time and easy filling. Due to the design of the machine, the distance between fertilizer and seed always stays the same. The seed hopper has a capacity of nearly 60 bushels and the fertilizer hopper touts a capacity of over 700 gallons. The planter ranges from 12 to 24 rows and, most surprising of all, is the ability to run at 9 miles per hour while maintaining precise seed placement.

One concern with any product made overseas is the timeframe of getting replacement parts when you need them in a hurry. Wilson acknowledges that may have been an issue in the past, but in today’s world no so much.

“Many times the local dealers of American manufacturers may not have the part that you are looking for in their shops and have to get it to you next day air,” Wilson said. “Any company on the globe can offer that so it levels the playing field from that standpoint.”

Wilson knows that his experience this spring is something that Horsch will want him to share with other producers across the country as they try to move into the U.S. marketplace. Wilson says he will be pleased to do so.

“The people with Horsch are top notch,” Wilson said. “They spend more time on their knees digging than they do in the cab because they want everything done right and this planter is built really well. They are a dedicated group.”

See the planter in action and hear more about Wilson’s planting progress in this Cab Cam video.

By Greg LaBarge, Ohio State University Extension Fertilizer prices have been on a steady march …