As the first significant cold front of the 2012 growing season passes through, many 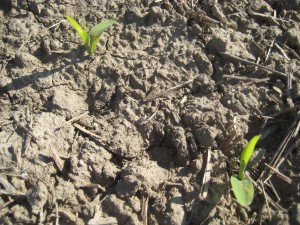 questions are arising concerning the fate of planted corn in the case of near or below freezing temperatures. With such a warm, early spring, many acres have been planted throughout the central and southern Corn Belt.

The key through the frost evaluation process is to understand the growth pattern of these small corn plants and give it at least a week for proper evaluation. Obviously, the bigger the corn is, the more susceptible it is to freeze injury. This is true because the depth of the growing point becomes shallower within the soil surface as the plant continues to grow. Keep in mind that the growing point or crown is located at approximately .75-inch below the soil surface, providing that planting depth itself was below 3/4 inch. The growing point does not actually reach the soil surface until the plant reaches the V5-V6 growth stage.

This should mean that the only way the growing point could freeze is if the soil temperature at .75-inch deep would be 32 degrees or less. History and experience has showed us that corn may withstand one night of below freezing temperatures, but may struggle through the 2nd and 3rd and even 4th nights, even though the soil temperature at .75-inch may not be as low as 32. Small, spiked corn plants all the way up to 3 leaf (4 inches in height) corn plants can have a tendency to “wick” the freeze into the crown, also known as the “popsicle” affect.

The first most important step throughout the evaluation is understanding the anatomy of a young plant and understanding how it operates. As the seed germinates, the heart of the seed (the embryo) pushes the first vegetative structure out that is known as the plumule. The plumule eventually grows (within seven days) toward the soil surface and develops into three major organs of a corn seedling, the mesocotyl, the crown and the coleoptile.

The mesocotyl is the connecting link between the seed and the crown. The mesocotyl is sometimes referred to as the “umbilical cord”, because the small seedling is dependent on the seed and the seed roots for approximately three to four weeks, until the first set of nodal roots are established and can take up necessary nutrients for plant growth. The crown is the area that is referred to as the growing point and is where the first set of permanent nodal roots are developed. Lastly, the coleoptile is the spike that pushes its way through the soil surface. As said above, the crown, or growing point, will always form approximately .75-inch below the soil surface. If planting depth is shallow, .75-inch or less, the mesocotyl will have no elongation and nodal root development will take place at or near the soil surface.

If planting depth exceeds .75-inch then the mesocotyl will lengthen and the growing point will remain at .75-inch and have plenty of room to establish the small plant’s first set of nodal roots. That is why 1.5 to 2 inches is a desirable planting depth.

Stage 2-Coleoptiles or Spikes that have emerged above the soil surface. Spiked corn should be safe. When temperatures get below freezing the tops of the spike will most likely be brown but the area below the soil surface should still show a nice white color with a yellow glow from within. This yellow glow represents the first 4-5 embryonic leaves that emerge first and are wrapped tightly within the spike itself. These leaves are naturally yellow until they make contact with sunlight, then they turn green. To left are photos of healthy corn seedlings. The far left shows a nice, white, healthy coleoptile with no “freeze line” or “wicking line” present within the growing point. The photo to its right shows the brown frozen tissue at the top with the 4-5 embryonic leaves with a yellow cast or color below.

Stage 3-Corn plants that range from V1 to V4 growth stage and are 2 to 4 inches in height. Obviously vulnerability has increased dramatically at this stage.

Depending on how low temperatures are for extended periods of time, will determine the severity of frosting or burning the green tissue. It is common to see small corn yellow up a bit with some brown edges or even discolored leaves a day or two after a frost. The plant to the right represents an injured crown. The freeze was able to “wick” down into the growing point and into the mesocotyl, causing it to turn brown and die.

Some correlations have shown that corn planted shallow (less than 1.3 inches) and corn that was planted on sand or very light soil seems to be more vulnerable than the opposite. As stated before, the first night of below freezing temperatures can turn the plant brown or black. The 2, 3 and 4 nights following will generally injure the growing point, if temperatures get into the mid to upper 20’s. Wait at least 7 days after the cool snap to give these plants time to recuperate and regrow.