HSUS files complaint against NPPC with the FTC 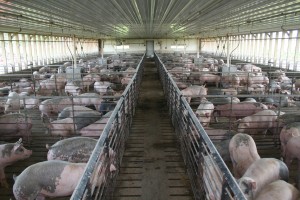 k Quality Assurance Plus” program are riddled with numerous false claims regarding the welfare of pigs, including the trade group’s patently false claim that its PQA Plus program helps to “ensure that all animals in the pork industry continue to receive humane care and handling.”

HSUS cites tail docking and the confinement of breeding sows as practices of concern. The complaint claims the abusive practices allowed by the We Care and PQA Plus programs are fundamentally inconsistent with the Pork Council’s public claims.

“The pork industry spends millions misleading the public about its animal welfare record, while allowing pigs to be crammed into tiny gestation crates where they can’t even turn around for months on end,” said Jonathan Lovvorn, senior vice president for animal protection litigation at The HSUS. “Rather than investing in real animal welfare reforms, the Pork Council is betting the farm on a deceptive PR campaign designed to mislead consumers with false assurances.”

In response to the HSUS measures, NPPC plans to vigorously defend their programs practices of the industry.

“The FTC complaint is the latest attack by animal-rights activists on America’s hog farmers, an assault that seems obviously in response to the U.S. pork industry’s strident opposition to congressional legislation that would allow federal bureaucrats to tell farmers how to raise and care for their animals. NPPC looks forward to the FTC quickly dismissing HSUS’s complaint,” the NPPC  said in a statement. “America’s hog farmers are committed to providing humane and compassionate care for their pigs at every stage of life. U.S. hog farmers are the ones who ensure the well-being of their animals and who are dedicated to producing safe, affordable and healthful foods for consumers — using standards and practices that have been designed with input from veterinarians and other animal-care experts — not groups that spend well-over half of the donations they receive on soliciting more contributions and, apparently, the other portion on suing American farmers.”