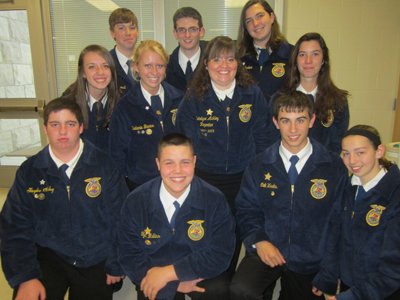 On May 14, 2012 The Benjamin Logan FFA had a leadership meeting. This meeting was based on the Creed “I Believe.” The newly elected chapter officers did different games and activities. The officers asked each member to bring in canned food items, if they brought in any cans they were put in a drawing to pie an officer in the face. Following all the activities all eleven officers where pied in the face.

On May 19, 2012 the 2012-2013 Benjamin Logan FFA officer team had an officer outing. The outing consisted of hiking at John Bryant St. Park and Clifton Gorge. After the beautiful hike officers went to Clifton Mill where they had lunch and fellowship. Officers then discussed ways to improve the chapter. Once officer discussed certain things officers then traveled to Young’s Dairy where they had a golf outing.