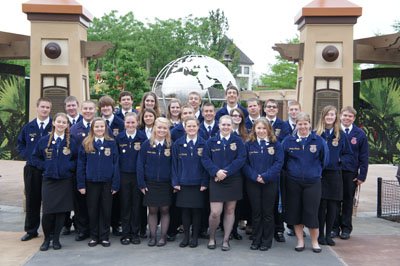 The Preble Shawnee FFA Chapter attended the Ohio FFA State Convention. The Chapter was recognized numerous times. The PSFFA Chapter donated money to two charities including CROP and Children’s Hospital. The Chapter also had five students compete in the State AgriScience Fair. Layne Brown and Aaron Lewis received gold ratings. Katie Bratton received her  State Chapter degree. Preble Shawnee also received a gold rating for their treasurer, reporter, and secretary officer books. The theme for this year’s convention was I Believe. We listened to motivational speakers and learnt valuable lessons about how to believe in yourself and others, while we learnt about believing we also learned not to let people down and how to help people feel better about themselves and just be an all around better person by being the best you can be. This experience allows our members to become great leaders in the future.