What will be the impact of early wheat?

On Friday April 27, wheat heads were observed in some fields in southern Ohio, about two weeks earlier than expected. Producers are asking whether such early development will likely have a negative effect on their crop. There is no easy answer to such a question; it all depends on the weather conditions over the next several weeks.

If cool weather occurs during most of the month of May, this will extend the grain fill period. Cool conditions will also reduce the development of foliar and head diseases such as Stagonospora and head scab, especially if it remains dry. Extended grain fill coupled with low disease severity will likely lead to higher grain yield and quality. However, wheat heading or flowering at the end of April or in early May is at greater risk for freezing injury. Two hours or more of exposure to 30o F could cause severe damage to wheat at the heading growth stage. Less injury could be expected if plants are exposed to less than two hours of freezing temperatures. In addition, since the development of the crop is never uniform across a 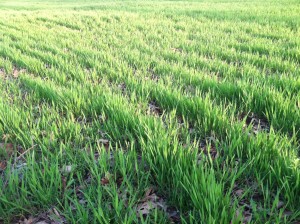 wheat field (secondary tillers are usually delayed in development), it is highly unlikely that entire fields would have been affected if temperatures did indeed reach the lower 30s. Wheat at earlier growth stages (Feekes 8-10) would have only suffered freezing injuries if temperatures had dropped below 30o F.

High temperatures (> 85 F) over the next few weeks could also have a negative effect on the crop, especially if conditions are wet and humid. Warm temperatures will reduce the grain fill period, reducing grain yield and quality. But most importantly, warm, humid conditions favor disease development, and if not managed with a well-timed fungicide application, further grain yield and quality losses will likely occur. Scout fields for foliar diseases and visit the head scab forecasting website (www.wheatscab.psu.edu) to determine the risk of head scab. If the risk of scab is moderate to high, apply Prosaro or Caramba at flowering (Feekes 10.5.1). These fungicides, applied at this growth stage, will give you the best results in terms of scab and vomitoxin reduction. An application made at Feekes 10.5.1 also usually provides adequate control of Stagonospora glume blotch and leaf rust.