BEST Program wraps up for 2012

BEST is a youth program of the Ohio Cattlemen’s Association (OCA) that recognizes Ohio’s junior beef exhibitors through a series of shows. Juniors who participate in these sanctioned shows earn points for their placing at each show. The OCA BEST program promotes educating Ohio’s juniors about the beef industry’s issues and rewards the successful accomplishments and hard work of those junior beef producers. 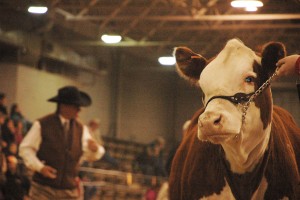 The 2011-2012 OCA BEST (Beef Exhibitor Show Total) Program wrapped up on June 2 with its annual awards banquet held at the Ohio Expo Center in Columbus.

“The banquet is a time to celebrate with family, friends and BEST supporters the many achievements of our BEST participants,” said Stephanie Sindel, BEST coordinator. “Each participant is recognized for their hard work that goes above and beyond the show ring.”

This year’s BEST program featured 16 sanctioned shows that weaved its way across the state. More than 415 head of market animals and heifers were shown and 315 youth participated.

Participants in this year’s program received an entry into the drawing for the free use of an 8’ x 26’ Eby Trailer complete with BEST logo detailing for the 2012-2013 BEST season, donated by Eby Trailer. Participants were given an entry for every animal they showed at each show throughout the season equaling more than 3,000 entries.  The lucky winner was Jonathan Barrett of Coolville, Ohio.

The BEST program was excited to be working with Edlon Miller of National Livestock Exhibitor who donated a 2012 Honda TRX 500 FM to support the organization. The raffle tickets were sold for the duration of the show season will all proceeds going to the BEST program and the winner was drawn at the banquet. Taylor Morbitzer, Grove City was the lucky winner. She is the daughter of Andy and Jennifer Morbitzer.

Courtney Welch, Fleming, Ohio, won the drawing for a $500 gift certificate toward the purchase of her next show animal from an OCA member. Winning a Show Passes valued at more than $750 were Erica Scott, Ravenna, Ohio; Kaci Felumlee, Newark, Ohio; and Devin Coon, Oak Hill, Ohio.

BEST Participants participated in a community service project collecting pop tabs for the Ronald McDonald House Charities. In all, BEST youth gathered more than 500 pounds of tabs. The top three leading the drive and each receiving a new iPod Touch were Matthew Randolph, Richmond; Cole Foor, Pataskala; and Isaac Gehret, Yorkshire. Jefferson County was also recognized for their efforts as the winning county.