Livestock farmers, who are now in the midst of breeding season, might find that selling heifers that aren’t meeting breeding expectations could make better financial sense than keeping an animal that isn’t achieving satisfactory conception rates, an Ohio State University Extension expert says.

“Given the current prices seen in today’s cattle markets, culling heifers with poor reproductive performance shouldn’t be a difficult decision,” he said. “In today’s cattle economy, the bottom line is, if we don’t get cows pregnant, we don’t get live calves. And having live calves to sell gives us the ability to pay the bills.”

Livestock producers can weed out under-performing yearling heifers by selling them as heavy feeder cattle or by feeding them a finishing ration for a short period and then selling them as market heifers. 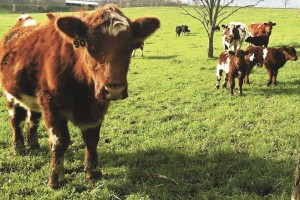 While farmers might be hesitant to make that decision, Grimes said open heifers are selling at a premium compared to past prices, which puts livestock producers with under-performing heifers in a prime position to sell.

“Conception or fertility rates in heifers are very important, and producers need to establish tough standards in the beginning to avoid poor performance problems in the long term,” Grimes said. “A virgin heifer shouldn’t have problems becoming pregnant, but if producers find they are having conception or fertility problems in the beginning, those substandard performance problems will continue throughout the lifetime of the animal.

“Producers shouldn’t be afraid to have animals achieve the high standards that they want. Producers can sell the under-performing animals out of the herd and get some that will meet their standards.”

Typically farmers try to breed heifers to have their first calves at two years of age. If they are having problems with heifers that aren’t getting pregnant, they might want to consider cutting their losses and get them out of their herd, Grimes said.

“Producers who do will find that it will result in a higher-producing herd after a few years,” he said. “Culling the poor producers will help farmers develop a better herd, focusing on slow but steady improvement through selection pressure.”

Other considerations for livestock farmers:

• If a heifer is adequate in size at 60 to 65% of mature weight at puberty, has been involved in a sound health program, and has been exposed to a fertile bull or bred artificially with high-quality semen, there is little reason that she should not become pregnant in a 60- to 90-day breeding season.

• Pregnancy status should be determined within 60 days after the conclusion of the breeding season through rectal examination, ultrasound or available blood tests. The cost of a pregnancy examination or test is a very small investment that can save an operation many dollars compared to the costs of maintaining an open female.