Wheat straw is in high demand across all of Ohio for a variety of reasons, including a steady to growing demand, fewer acres devoted to wheat production, or lack of planting opportunity in the fall of 2011. What is the value of the nutrients being removed when straw is baled? This is an important question to ask when deciding whether to leave the straw in the field or bale it for sale at a later time. 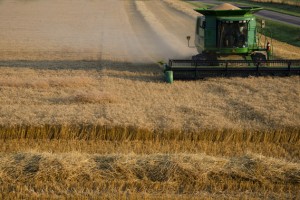 A good wheat crop will yield between 1 and 1.2 tons of straw per acre on a dry matter basis. Robert Mullen reported in previous CORN newsletters that a ton of wheat straw would provide approximately 11 pounds of N, 3 pounds of P2O5 and 20 pounds of K2O. While a laboratory analysis would be most accurate and can account for weather and other factors that occurred this year, these would be legitimate numbers to use as estimation.

Most of the nutrient value is potash, some as N, and little as phosphorus.  On June 18, 2012, a northwest Ohio co-op has the following in-season prices:  Potash (0-0-60) cost $619-$645 per ton and DAP (18-46-0) was priced at $645-672 per ton.  Besides providing nutrients, straw has value as organic matter to soil, but it is difficult to determine the dollar value for it. Removal of straw does lower soil potash levels, but a soil test should be done to accurately estimate future crop availability.

Ohio markets can be helpful on determining a potential price for straw.  The Mount Hope Auction on June 13, 2012 reported wheat straw selling at $145-$165 per ton for small square bales.  The Yoder & Frey Auction in Archbold reported the June 11, 2012 results of straw bale prices of unidentified weight of $1.20 -$3.60 per bale.