Farmers in for a tough June Dairy Month

A conversation with…Peter Vitaliano, with the National Milk Producers Federation

OCJ: This could be a tough Dairy Month for many dairy farmers due to their low income. How are the nation’s dairy farmers handling this challenge?

Peter: Dairy farmers are coming off a good year last year, but they are still recovering from the financial devastation of 2009. The current tough situation has certainly halted that recovery for the time being.

OCJ: How do current prices compare to recent months and years?

Peter: Since milk prices tend to have seasonal patterns, it’s useful to compare the average price U.S. dairy farmers have received during the past three months, March through May, to the range of prices they received during the same three months in recent years. By this measure, this year’s prices are about $3 per hundredweight (cwt.) lower than last year’s record high prices and about $5 per cwt. higher than those during the terrible year 2009.

OCJ: What factors are contributing to these prices?

Peter: The major factor causing the weaker prices is the strong surge in milk production in the United States and in all the major dairy exporting countries. Overall demand for dairy products, both domestically and internationally, is basically sound, but it’s currently being overwhelmed by supply. During the first four months of 2012, U.S. milk production was 3% higher than during the same period last year. The average annual growth for the first third of the year over the past dozen years is 1.4%.

OCJ: Is there any sign of hope for higher prices any time soon? Why or why not?

Peter: The recent surge in U.S. milk production shows signs of easing, and dairy markets are currently signaling that higher prices may be coming. The CME cash market price for cheddar cheese blocks rose by 12 cents a pound during the last week of May, and the cash butter price is up by 10 cents a pound during May. The current dairy futures are indicating that U.S. milk prices will average about $1 per cwt. higher during the second half of 2012 compared to their expected low for the year this month. And the Class III futures themselves have been rising over the past month, by as much as $1.70 per cwt. for the average of the next three months’ contracts. 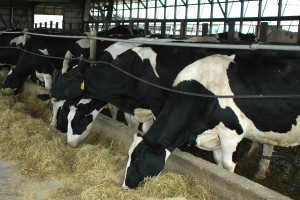 OCJ: On the flip side, input prices are high. How are dairy farmers reducing costs? Is there any relief for high input costs in the near future for dairy producers?

Peter: Good question, because price comparisons themselves have become less meaningful over the past half dozen years, as feed costs have risen and become more volatile. What’s made this year especially tough for dairy farmers is that feed costs have reversed a clear downward trend that they were following toward the end of last year, especially for soybean meal and alfalfa hay. But some relief should be coming, especially for corn. The twin forces of ethanol and foreign import demand that boosted corn prices so much in recent years appear to be easing, and prospects for a record harvest this fall are sending corn futures down by a substantial amount, though it will probably still take a while for these to be realizable for dairy farmers in the form of lower forward-priced purchase arrangements. Prices for soybean meal and alfalfa hay are still rising due to strong demand by countries like China, which are building up their own livestock industries. However, the soybean meal futures are also indicating lower prices ahead. Lower milk and feed prices normally mean lower hay prices, but these are tough to predict in the face of current strong demand by offshore buyers.

OCJ: What strategies can dairy farmers take to successfully emerge from these tough times?

Peter: Dairy farmers can take such actions on at least three levels. As always, they can benefit by improving the efficiency of their own individual operations, which is imperative just to avoid falling behind in today’s rapidly-evolving dairy industry. Then, they can work to improve the export performance of their own cooperative marketing organizations. With 13% of their total milk production being sold to other countries, and their milk prices increasingly being generated in the world markets, U.S. dairy farmers can no longer afford to treat their collective performance as exporters with anything other than the upmost seriousness. It was the large-scale failure to maintain the United States’ newly-gained dairy export market share during the global meltdown a few years ago that made 2009 much worse than it should have been for U.S. dairy farmers. In particular, producers and cooperatives who are not currently part of the Cooperatives Working Together (CWT) program should join those representing 70% of the nation’s milk marketings in investing in CWT, which plays a key role in helping the U.S. dairy industry remain an effective and consistent exporter. And at the national level, they can support the enactment of the pending dairy legislation, which is designed to benefit dairy farmers in the economic environment of the current dairy industry, which the current dairy policy does not.