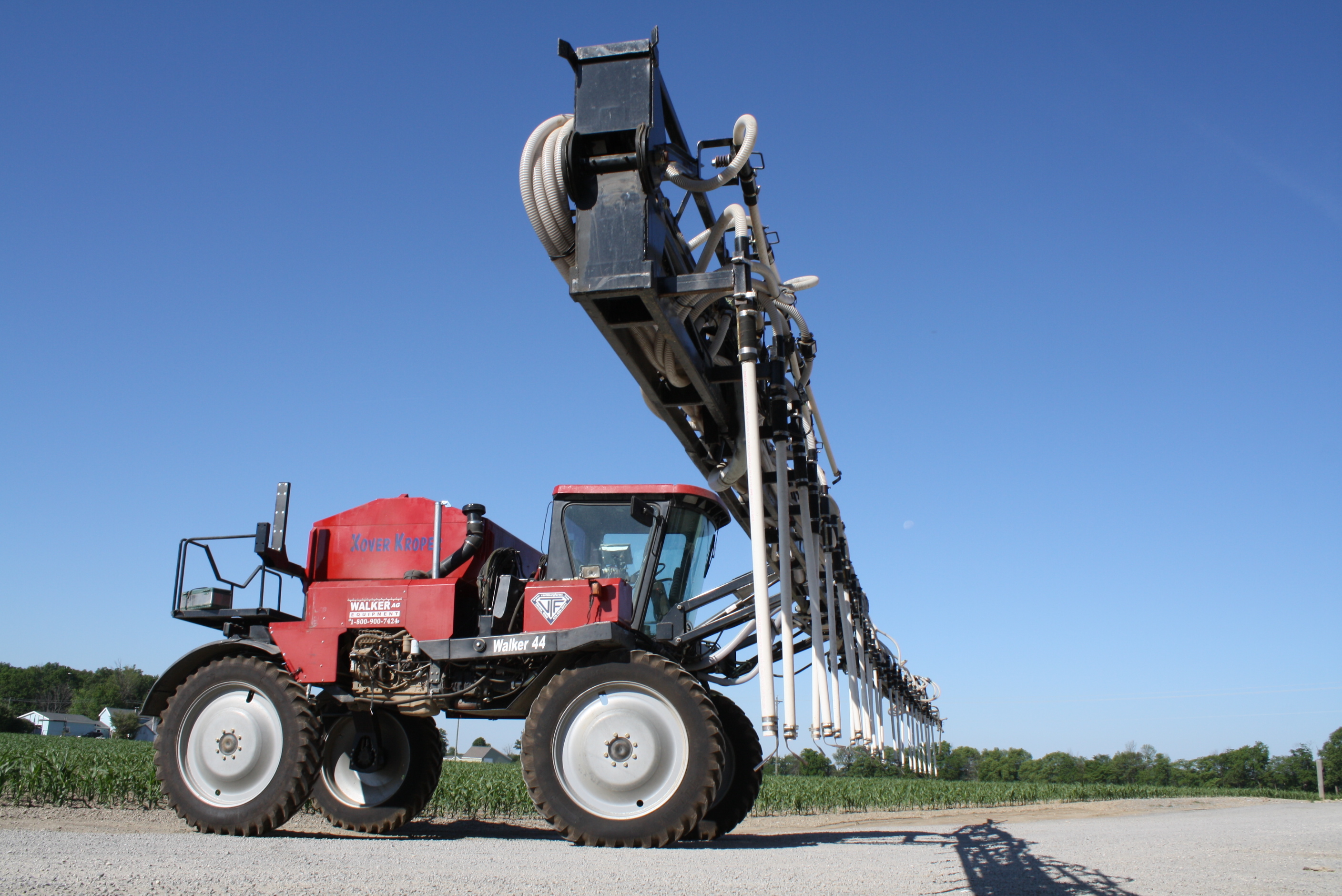 VanTilburg Farms, located outside of Celina, knows the benefits of utilizing cover crops. They tried several different methods of getting the cover crops in the ground, including a drill and flying on cover crops with an airplane.

“We’d been playing with cover crops for the past five years,” said Matt VanTilburg. “We decided if we’re going to go with this, we need a machine to just plant cover crops.”

VanTilburg, along with Larry Pingry, the head engineer for VanTilburg Farms, went to work creating one. They have been experimenting with a very unique set-up of a post sprayer with a liquid tank on it featuring five mounted 12-volt seeders on the boom.

They liked what the modified sprayer did, but there were some challenges with it.

“We could turn the seeder on and off, but couldn’t stop the flow,” VanTilburg said. “We were constantly running out and we needed a guy just to dump seed in the seeders.”

They went back to the drawing board to come up with an improved design.

“We found an old Walker sprayer and had it refurbished out at the factory and they sent it to us without the tank, but with the booms attached,” VanTilburg said. “We had a local weld shop weld us a tank for it.“

The tank will hold about 150 bushels. Pingry designed the flow and delivery system to get it between 30-inch rows. The six-foot of clearance allows it to get over corn easily.

It has a Salford metering system and distribution heads. Hoses run out on 30-inch spacings and PVC tubes run down with little deflectors on the bottom to spread the seed out at the bottom. It’s also equipped with auto-steer and scales on the hopper.

“This machine came with the wet kit on the booms, without the stainless steel product tank, and we put the air lines on it to deliver the seed out to each point,”

VanTilburg said. “As long as there isn’t any foreign material in the seed, it doesn’t clog up.”

Last year was the first year they used the machine and planted about 6,000 acres with it. They learned some things and are now making a few modifications to it.

“When we get into corn that’s more mature when the silks starts to dry down, we get a lot of chaff and it can plug up our radiator a little bit,” VanTilburg said. “Pingry has been making modifications to the air flow and to the cooling system to resolve that.”

“It’s faster than a drill, but not as quick as an airplane,” VanTilburg said. 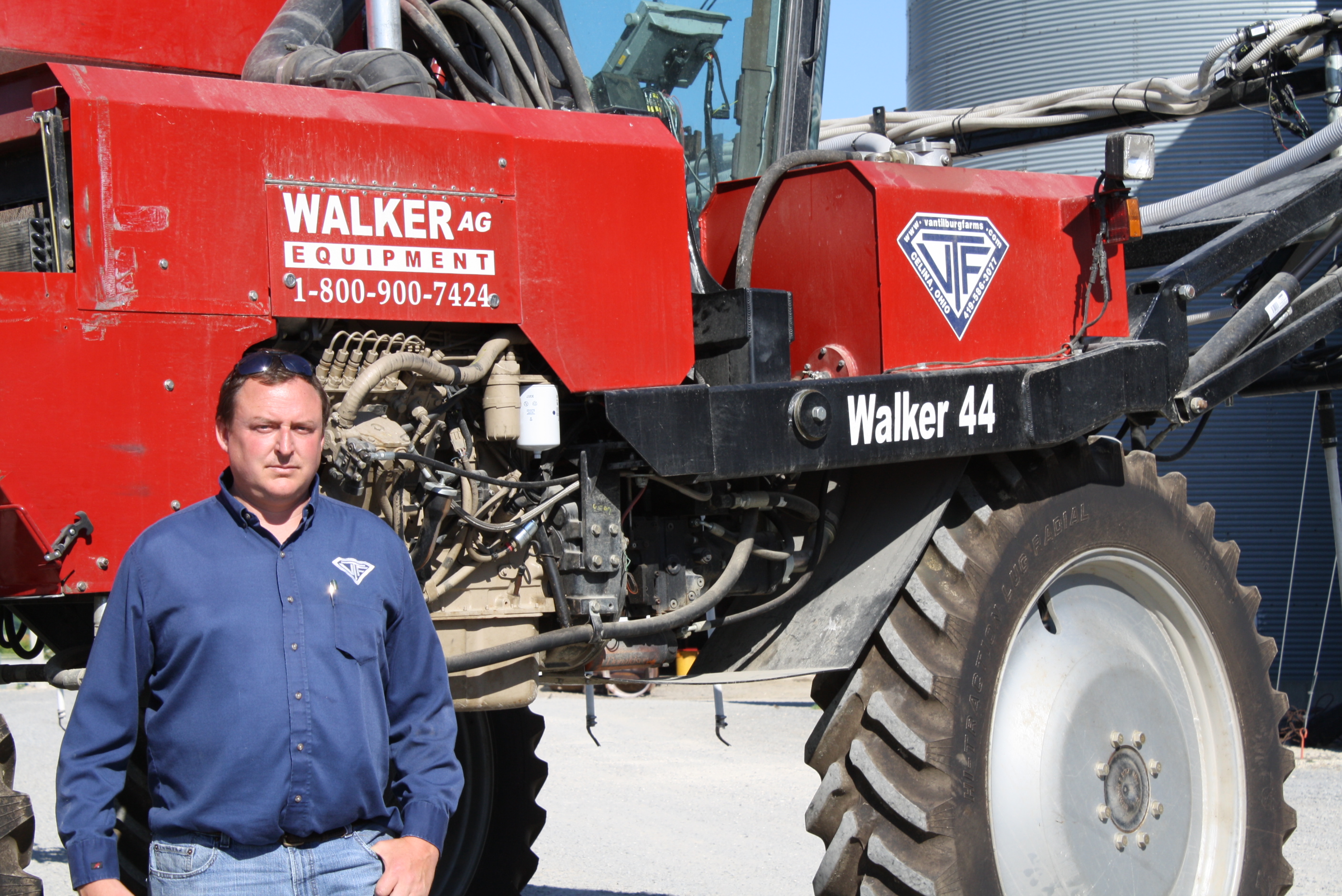 The VanTillburgs believe the best practice for cover cropping is inter-seeding directly into standing crops. Getting in the field early with this machine lets cover crops establish an early stand, allowing more time for growth. Other advantages include seeding in windy conditions, even application of seed and more opportunities to harvest during wet seasons.

So far, they’ve planted seed rye, annual rye, clover, and radishes with it. In addition, the machine can be used for planting wheat.

“Last fall we used it to seed a wheat field. Then the farmer used a vertical tillage tool to work the wheat in. It came up great,” VanTilburg said.

It’s even been used to over-seed alfalfa. They also plan to sidedress urea with it as well. Their next experiment is to intercrop soybeans into standing wheat.

They use the machine on their farm, but they also travel a 60-mile radius custom applying for other farmers. He acknowledges it’s a long-term return on the investment.

“I think it’s going to pay off, “ VanTilburg said because he’s seen the difference in the soil from using cover crops. “You realize the ground is alive and we need to treat it a little different than we have in the past. The cover crops help keep the soil alive and the microorganisms happy all year. Long-term that should pay off this iron.”