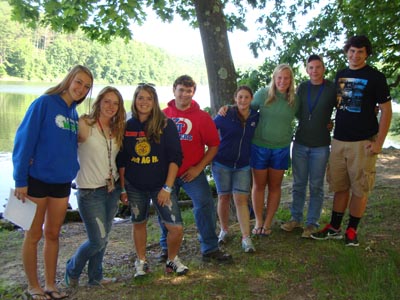 Camp Muskingum has been a home for FFA fun for many years.

Eight members of the Zane Trace FFA Chapter recently attended the first session of Ohio FFA Camp. The camp took place from June 4th – 8th at Camp Muskingum near Carrollton, Ohio.  The students were among over 260 members from around the state who participated in the five day camp.  During their time at camp the members participated in leadership workshops, conducted service projects and participated in camp sports activities including: shooting sports, fishing, boating, beach volleyball, softball and basketball among others.  The camp workshops were led by the 2011-2012 FFA State Officers and included topics in goal setting, diversity and communication.  During the camp session, the Zane Trace members donated $250 to Children’s Hospital through the “Pie in the Eye” activity.  Each ZT member was allowed to throw a whipped cream pie in the face of their favorite advisor, state officer or camp staff member in the event which raised over $1200 total for Children’s Hospital.   Every member who attended the camp had a great time and is looking forward to next summer’s camp session already!