Recent strong storms in Ohio brought high winds and some much needed rainfall in several parts of the state. The rainfall was critical in many parts of Ohio where the corn and soybeans were showing strong signs of drought and heat stress. Since April 1, many parts of Ohio have received 5 to 10 inches of rainfall, which is 3 to 4 inches below the 5-year average. Growing Degree Days (GDD’s) for the same period have accumulated 1,200 to 1,300 units, which is 175 t0 200 GDD’s ahead of normal. We use the GDD’s to track the overall progress of corn development. I like to consult the numbers weekly to track the progress of rainfall and temperature in the state. You can also track these at the Ohio page on the National Agricultural Statistics Service website.

Why is my corn short? 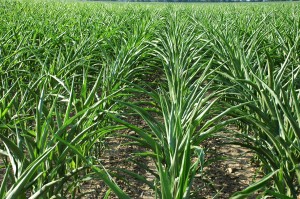 April 1 compared to May 1. Longer daylengths result in longer internodes and taller corn. Internode elongation occurs primarily from V5 through slightly after pollination. In 2012, corn planting was earlier than the 5-year average, contributing to the shorter stature.

Reduced plant height for both corn and soybeans is a strong indicator of insufficient moisture. This is common knowledge. However, you may not know that internode elongation is dependant on cell growth, which is heavily dependent on the ability of the plant to obtain soil moisture. Corn and soybean plants can be deficient in moisture due to poor root growth, poor soil conditions, and/or droughty conditions.

Corn pollination and fertilization of the ovules (kernels) is a very important phase of crop development and any stress during this time can result in decreased yields. Yield potential of the corn plant (ear length and row number) has been established earlier in the season but successful pollination determines the extent to which yield potential is met. Unfortunately, pollination is also one of the least controllable aspects of corn production since its success or failure is primarily influenced by environmental conditions. Summer months usually deliver hot temperatures and dry weather which can result in significant crop stress.

High-temperature damage to corn almost always coincides with drought stress. It is difficult to separate the effect of heat and drought stress during the pollination process. When humidity is low and temperatures exceed 95 degrees, corn silks can desiccate and die. The viability of pollen may be reduced, resulting in fewer fertilized kernels. However, pollen shed typically occurs in the early to mid-morning when temperatures are not as warm. The corn tassel provides new pollen everyday until shed is complete. Pollination can be successful during long stretches of high temperatures if adequate moisture is supplied to the plant.

Corn plants often roll their leaves to protect themselves from excessive moisture loss due to transpiration. Plants may roll their leaves in response to inadequate moisture, however, rolled leaves in the afternoon may not mean that corn is under drought stress. A key indicator of drought stress is when corn leaves begin to roll early in the morning and continue to stay rolled throughout the day. Continual wilting is another indicator of severe drought stress. Corn specialists at The Ohio State University and Purdue University report that severe drought stress during silking and pollen shed may reduce yield up to 8% per day and severe stress during the two weeks following silking may reduce yield up to 6% per day. Corn yield can also be affected if adequate moisture is not available after kernel fertilization.

Nitrogen and phosphorous uptake are rapid during pollination and grain fill, good fertility is important. Select corn hybrids that are adapted to heat and drought tolerance. Risk may be managed by diversifying with different hybrids that pollinate at different times and different maturities. Select hybrids with multiple types of insect protection to protect genetic yield potential. Monitor fields for corn rootworm adults or pests that may feed on silks and Corn Earworm feeding on ear tips.