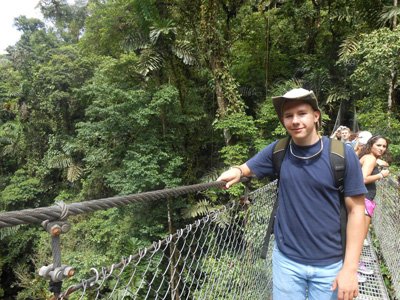 David Glass, of Zane Trace FFA, had the unique opportunity to travel to Costa Rica for ten days in June on behalf of the National FFA Association. David received this trip along with his National Proficiency Award at FFA National Convention in the fall. While in Costa Rica, David went on many agricultural tours, learned about the Costa Rican culture, met many new people, and participated in fun activities such as white water rafting and zip lining.

David started of his trip with a tour of EARTH University on Thursday, June 14th. EARTH is a private university offering an education in agricultural science and natural resources. While at EARTH, David toured the Organic Farm, where he learned a bit about recycling and production of organic fertilizers, as well as the university’s Urban Agricultural projects. David then traveled from EARTH to the Dole banana farm located in Sarapiqui, Costa Rica. There, he learned about the process of growing, labeling, shipping, and selling bananas.

Friday was an action packed day for David as well. He spent the morning white water rafting on the Sarapiqui River, then took the Pineapple Tour at Collins Street Bakery. The Pineapple Tour included the history, cultivation, and phases of pineapple growth. He also enjoyed some delicious samples of the fresh pineapple!

The remainder of the trip consisted of both educational and fun, cultural experiences. David had the opportunity to take a nature walk through the Hanging Bridges of Arenal and view a beautiful topiary garden in Zarceno. He visited Don Juan’s agricultural farm, where he learned the process of growing sugar cane and producing sugar. He was also able to tour a working dairy farm called Finca Julietta, one of few in the area.

As David’s days in Costa Rica began to dwindle, he took in more of his beautiful surroundings. On Sunday, he was given a horticultural tour at Villa Blanca, while viewing the impressive mountains of the Biological Reserve around him. David spent Monday visiting Palma Rica in Damas, which has been recognized as leader in palm oil production in Latin America due to its scientific approach to yield management. Before heading back to the United States, David also enjoyed time on the beach in Manuel Antonio, and a riveting coffee tour at the Doka Plantation in San Jose.

“I loved getting to meet new people,” said David, “But my favorite part of the whole trip was just getting to experience a different cultural.”

Costa Rica is definitely a much different culture than David is used to in the United States, but his experience was a once in a lifetime opportunity. He was able to learn so much about the agricultural industry in Costa Rica, as well as take in the sights of a much different land. He has returned home with a fresh outlook on where his food comes from, and what goes on in other parts of the world. He only has the National FFA Organization to thank for that.