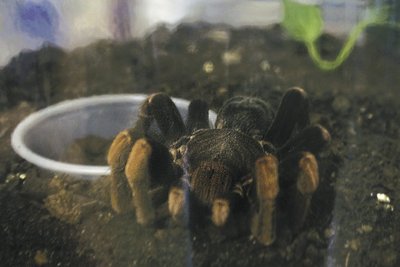 Enrolling in an agricultural education class opens the door to many opportunities for a student. They receive classroom instruction, have the option of participating in the student leadership organization known as the FFA and are asked to complete a Supervised Agricultural Experience (SAE) project. While the classroom subjects and FFA opportunities are diverse, the SAE project gives students a chance to really explore their own interests, expanding their knowledge and abilities in a chosen area including research, job placement and production agriculture.

Many students choose something more traditional such as growing corn and soybeans, raising cattle, or working at an agribusiness. However, one Genoa FFA member chose a less traditional route. Michael Snider’s SAE project consists of breeding and raising more than 15 different kinds of spiders in partnership with his father, in the attic of their garage.

The idea of raising spiders came out of a shared interest between Snider and his father.

“My dad did this before I was born, so we’ve really just got back into it. He’s always told me about spiders, but I never got to really see everything until we started raising them,” Snider said.

There are many advantages these non-traditional animals provide. Their small size is beneficial and allows for their housing to be built vertically, which is an important factor when there are anywhere from 200 to 300 spiders on hand at a given time.

“You don’t have to take a spider to the vet, and there are basically no diseases for spiders and few natural predators,” Snider said. “And since they slowly digest their food, kind of like snakes, they don’t need to be fed every day. One cricket can last them half a day and I give them five or six at a time.”

Live crickets arrive in the mail every week or so, and to accommodate the more than 200 spiders they are packaged 6,000 to a box.

Working with spiders also means taking extra precautions. They must always be approached from the front because, when startled, they have the ability to flick hairs from their abdomen that will irritate the skin.

“And if they rear-up, they might attack. Their venom is not lethal to humans, but the fangs are large and can be painful. It’s a lot like a bee sting, but worse,” said Snider, who has experienced a few spider bites first hand.

With most of the spiders originating in South America and the Southwest United States, it is also important to keep them in a climate controlled area.

“They need an environment that is warm and humid. We keep it at 80 degrees in their area and have to take extra precautions to make sure all the lids are secure in the winter. If they would happen to get down the stairs, they would die from the cold temperatures,” Snider said.

An important aspect of the SAE project is record keeping. Snider carefully tracks all of the spiders with labels on each habitat that tells the breed and sex. In addition, he tracks the dates of each time they molt and shed their exoskeleton. Snider estimates he has handled more than 1,000 spiders throughout his involvement in the business.

“We’ve had a lot, probably close to 1,500 counting the baby spiders. One of the coolest was an Orange King Baboon, it was very rare,” Snider said. “The adult females are the most desirable as they can be used for breeding. The males are considered more disposable and the females will sometimes eat them after mating. Juvenile spiders can be sold at any stage and can take up to a year to fully mature.”

Finding an outlet for the spiders has provided Snider with a great hands-on experience in niche marketing. Spiders are not a consumable commodity like most agricultural products. A majority of his spiders are purchased for pets or by other breeders. There are also certain types that are more desirable for those who collect rare spiders. The value depends greatly on the stage the spider is in, ranging from young and older juveniles to full adult males and females. Snider attends shows and also utilizes a few arachnid websites to market the spiders.

In addition to the 15 different breeds of spiders, mainly varieties of tarantulas, there are a few dozen Praying Mantises that comprise the least dangerous part of the collection. Mantis breeds include the Ghost Mantis, which appears as a crumpled leaf, and the Orchid Mantis, which resembles a flower. These can be harder to spot in nature and are unique additions to the collection. The mantises added an element of diversity to this unique venture and provided for expansion.

Snider’s SAE project is just one element of his agricultural education experience. He originally enrolled in wood working, but has gotten so much more out of the classes through the years. He has participated in the Agricultural Mechanics and Dairy Science Career Development Events, attended FFA Camp, and recently won Ohio’s Specialty Animal Production Proficiency Award for his SAE project.

Proficiency awards are based on extensive evaluation of a student’s SAE project. They are awarded based on the student’s involvement in the project, skills they have learned, increasing responsibility and general project growth. Earning a proficiency award is no easy task. Students must meet all requirements, from record keeping to project pictures and essay questions.

“They give you a packet you have to fill out about what goes into the project. You just crunch the numbers and plug them in, but there are questions about what you’ve done over the years. That’s the hardest part,” Snider said.

From the paper applications, students are selected to interview for the state awards.

There are 47 different areas for proficiency awards. Snider’s project fell into the Specialty Animal Production category. Among his top competitors were students who raise rabbits and alpacas as well as a student who works at a zoo. Snider was named the state winner at the 2012 Ohio FFA Convention. After carefully combing over his application, it was sent on to the National FFA and Snider should soon find out where he stands nationally. If named as one of the four national finalists, he will attend the National FFA Convention this fall for more interviews and receive on stage recognition at the convention.

Snider still has his senior year of high school ahead of him, but already recognizes many of the benefits he has gained through agricultural education. Attending FFA Camp and other events has allowed him to meet and bond with other students from across the state. He credits his SAE with teaching him to be more responsible and independent. He is able to do his own thing, make his own money and not depend on his parents so much. As for the classroom instruction, Snider said, “It’s more like life lessons then just school work. My favorite part is my teacher, Mr. Ryan, he’s awesome.”

While he has enjoyed the experience and learned quite a bit from his spiders, Snider said they will be cutting back during the next year so his dad will be able to handle the venture alone when Snider heads off to college in the fall. He plans to attend the University of Toledo to focus his studies on mechanical engineering.