There is little to do but hope for rain

The dry weather and heat are taking a heavy toll on crop conditions around the state.Just last week, things were grim on Chad Kemp’s Preble County farm.

“Our corn is four to five feet tall. The stands look great. The plants are there but they are in the pineapple stage curling up with the heat and no water,” said Chad Kemp, who farms in Preble County. “Soybeans never got a good start this year. They don’t have much height. The roots have gotten down far enough that they are starting to grow a little. Some of the smaller beans are flipping their leaves over and a lot of the stands 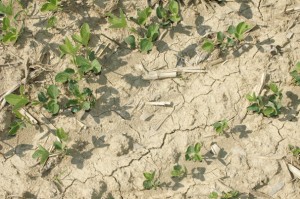 With just over half an inch of rain in the last month and a half, the roughy 1.5 inches of rain on the farm this weekend made a tremendous difference.

“We’re very concerned. It was getting to be pretty extreme,” Kemp said. “We’ve dug down in our no-till and there is still a little bit of moisture four or five inches down, but it is not going to be enough to withstand the heat. The majority of our corn crop is tasseling. This rain will be a game changer. We were about done and it saved us. We will have a crop now, but I think we have suffered some yield loss.”

Kemp is considering some options to improve the situation.

“We are talking about doing some foliar feeding to try and keep our plants alive longer so we can possibly catch a shower. It could give us a longer window of opportunity,” Kemp said.

Other than getting a rain, there is really not much that can be done to help crops through these dry conditions, according to University of Illinois crop sciences professor Emerson Nafziger.

“When water is clearly the major limitation to plant function, we would expect little or no response to anything we can apply that’s not water,” Nafziger said.

This includes fungicides that reduce respiration and increase the plant’s sugar supply.

Applying products that reduce the “ethylene effects” in stressed plants will also unlikely be beneficial. There can be benefits of protecting the crop from reduction in leaf area, such as insect damage or fungal disease, if rainfall would resume. Foliar nutrients are unlikely to be of much benefit, either.

For soybeans, there is more time, but they will eventually need rain as well. The period over which new flowers appear will last for up to a month as the soybean plants continue to increase node numbers and stem height, and can even bounce back if stress is relieved after that, Nafziger said. This longer flowering period makes the soybean crop better able to set pods and to start filling seeds even if there is some stress during July.

“An early start to soybean flowering is generally positive, but we remain concerned about how water shortages might affect soybean pod formation,” Nafziger said. “If we continue with little or no rainfall, abortion of flowers or of pods will likely continue.”

As with corn, applying materials promoted to reduce stress in soybean is not likely to do much good with no rain. According to the National Weather Service, warm and dry conditions are expected through July as soil moisture becomes depleted and the cycle of dry conditions continues. Unfortunately, once it gets going, this dry cycle is traditionally hard to break free from until August.