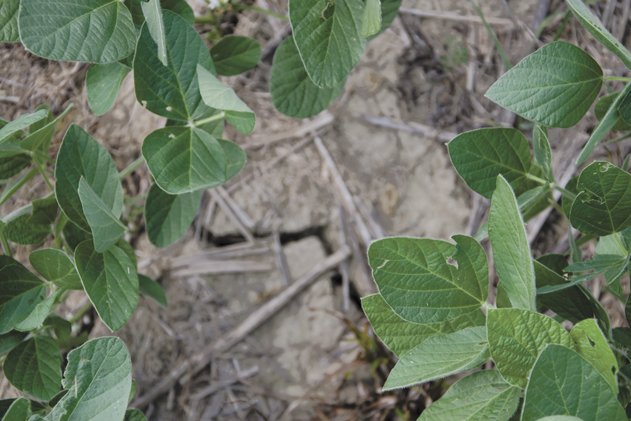 Another look at a challenging 2012

To say that 2012 has been challenging would be an understatement. As we get deeper into August it is becoming clearer how the hot and dry weather has affected the crops. You have probably read or heard a lot about the effects of heat and drought on corn pollination. Even with hot and dry weather early in the growing season if weather conditions during and around pollination are near normal, close to average yields can still be obtained. This is why when corn was knee high and we were dry, I felt we could still have a good year. The most critical time would be at pollination.

Unfortunately for many of us, the drought has persisted not only through pollination, but beyond. Just as equally, if not more

important, is that extreme heat has come along with it. During pollination many of us were breaking temperature records with ease. Pollen is especially sensitive to hot weather and silk growth is adversely affected by drought conditions.

Pollen shed is not a continuous process. Pollen sheds when conditions are favorable but is typically at its peak during the morning hours. A challenge this year was that overnight lows were only in the upper 70s and some nights only dipped into the 80s. This meant by nine to 10 a.m. the next morning temperatures were already near 90. This limited the amount of pollen shed and decreased the viability of that pollen. Pollen shed typically lasts about a week and peaks at around day three. In several fields this year, areas on hills and clay knobs failed to silk during pollen shed, thus were never pollinated at all. Some areas received rain and began silking later, but if it was more than a week after pollination there was still little to no fertilization of the ovules because no pollen was present.

On a positive note, I have been surprised at how well many fields have pollinated considering the adverse conditions. What will hurt yield in these fields is that ear length is shorter than normal and if the dry weather continues, kernel depth will be shallower than normal. As the corn crop continues to mature, rains will have a less and less effect on kernel depth and on yield.

So what about beans? An advantage for soybeans is that they flower over a wide time frame, usually four to five weeks. Even in a normal year up to 60% of the flowers on a soybean plant will abort. So seeing aborted flowers isn’t necessarily a reason to panic. The most crucial time for the soybean plant is once it begins the seed-filling period. Dry weather during this period will have the most effect on yield with smaller seed and even aborted pods. Late rains will still be very beneficial for the soybean crop and if they occur we could still see very respectable yields.

Hot and dry years are a perfect recipe for spider mites so it comes as no surprise that we have begun to see them in several locations. The challenge with spider mites is that there is no exact threshold to warrant a rescue treatment. Normally a farmer won’t know they have spider mites until they see leaves bronzing along the outer edges of their field. By the time bronzing of leaves occurs there is significant spider mite pressure in those areas. Typically this would warrant treatment at least along field boundaries. Even when these fields appear to be green on the inside of the field it is important to still scout the entire field. Spider mites may still be present inside the field, only in smaller populations.

Spider mites feed on the bottom side of the leaf and are difficult to see without a hand lens. Small light green spots on the top of the leaf caused from spider mite feeding can be seen without at hand lens. At this stage with a hot dry forecast, a rescue treatment would likely be warranted. Rain can help reduce small populations of spider mites but with moderate to high populations a treatment would likely be recommended even with rain in the forecast.

So even as the dog days of summer begin to set in and the 2012 season begins to draw to a close, there are still reasons to be out in the field.