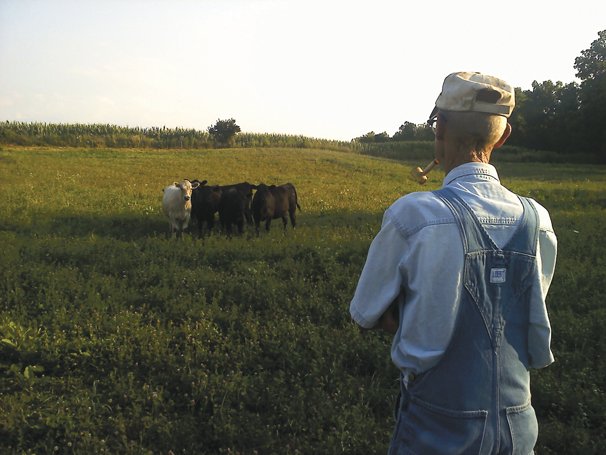 Licking County livestock producer Popeye Thompson looks over his cattle and wonders if his hay supply will last through the winter after a dry growing season.

Licking County livestock producer Popeye Thompson is doing double takes when he looks at the calendar. Thompson knows from his decades of experience that it is never a promising scenario to start feeding alfalfa in July, but that is exactly what happened, not only on Thompson’s Alexandria farm, but on hundreds of other farms all over Ohio as well.

“Things have deteriorated faster than I thought they ever could,” Thompson said. “Until we get a decent amount of rain, I will have to continue to supplement some of my hay, and hope that I can keep enough stored when I need it the most this winter.”

Generally this time of year, Thompson has a successful grazing plan in place. He rotates his cattle on two different pastures every three weeks. The extreme heat and lack of rain, though, changed that philosophy in quick fashion after drought

conditions set in this year. With the lack of rain, Thompson’s first pasture never recovered and the second pasture only sufficed for three days. After that, Thompson headed to the barn to distribute some of the bales that had just been put away weeks before.

Whenever a farmer has to use up some hay this early in the year, the immediate concern is if there will there be enough to get through winter. On the other end of the spectrum, if there isn’t enough hay to feed a herd, it will be time to take a serious look at the cull sheet. Thompson said that decision depends a lot on the profitability outlook after taking into account the factor of the price of roughage, should he run out this winter.

Thompson sees, as he looks over his herd, that one problem is leading to another.

“When a pasture falls off and the nutrition gets low, milk supply gets low,” Thompson said. “These calves are in need of quite a bit of milk right now and I have seen calves stealing milk from other cows and overtaking smaller calves for it. I have seen that every once in a while in the past, but nothing like this year.”

Thompson’s only option for that situation is to separate the herd or begin an early weaning program, both of which will throw his operation off kilter. What makes feeding hay over the summer even more challenging is that, although the quality of alfalfa is very high this year, the quantity leaves much to be desired.

For Thompson, the first cutting of alfalfa was excellent, in both yield and quality. However, the second cutting got to about 14 inches high and began to deteriorate. That’s when the decision was made to go ahead and take it off, only yielding about half the number of bales. The only way Thompson sees getting a decent third cutting is if Mother Nature would do her part and bring some rain. Otherwise, there will be a shortage as winter arrives.

“We may only get three cuttings out of it this year,” said Brad Ott, a DuPont Pioneer Account Manager in west Central Ohio. “We just don’t have the height, so we’ve kind of stuck in a bad spot with what to do with it.”

Some producers have taken the risk of cutting early, just to maintain the quality. Ott said the only advantage to that is economics.

“By cutting early you are going to lose the ability for the plant to regenerate,” Ott said. “So from an agronomic standpoint, I wouldn’t recommend it.”

Ohio growers may find that, although alfalfa can weather the current extreme heat and drought conditions from a quality standpoint, there will be less alfalfa overall because of the lack of moisture the region continues to experience. An established alfalfa plant has a deep taproot allowing it to extract moisture from the soil and continue growing even under drought conditions, said Rory Lewandowski, an agricultural and natural resources educator for OSU Extension. And while the plants can go into a prolonged dormancy in drought conditions and still recover when it rains, the short-term forecast calls for continued hot, dry weather, he said.

So growers whose plants have regrowth beginning to bloom at four to six inches need to know that there will be little additional tonnage gained by delaying harvest, Lewandowski said.

“The bottom line is that drought-induced moisture stress can cause plants to move through maturity stages quicker, and plants bloom sooner on fewer and shorter stems,” he said. “The key here is that we’re not going to have a lot of growth. So while quality may be improved, quantity is reduced.”

With this in mind, growers may want to consider letting the plants approach 100% bloom before harvesting to allow the plant to build nonstructural carbohydrate reserves, Lewandowski said.

Growers who decide to cut their alfalfa stand under drought conditions should cut them at the normal height, which will allow them to gain optimum yield, he said.

But some growers may find that there isn’t enough quantity to make a machine harvest cost effective, Lewandowski said.

“In those cases, it’s much more economical to let livestock salvage a low-tonnage yield by grazing the alfalfa,” he said.

Those who choose that option need to take precautions to prevent livestock bloat, Lewandowski said, including not grazing alfalfa when dew is on it, making sure stocking density is high enough to prevent animals from grazing only the tops of plants, and potentially using a bloat preventive.

“Growers are recognizing that in a drought situation, they have to think about different management strategies,” he said. “We’re seeing above-average temperatures and below-average rainfall, which is not a good combination for anyone. From our forage crops, agronomic crops and field crops, everyone is feeling the stress from this lack of moisture and extreme heat. So some producers are beginning to make plans, including anticipating where they can find some other hay sources and thinking about what this will mean for fall and winter feeding.”