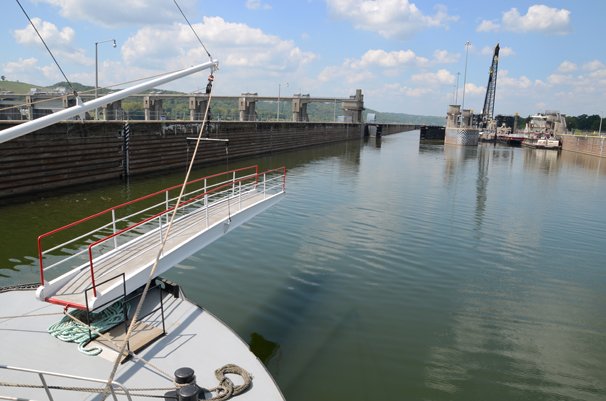 Locks and dams key to the future of Ohio ag

Locks and dams key to the future of Ohio ag

Along with its rich soils, gifted farmers and thirst for innovation, America has long been

home to the best transportation infrastructure the world has ever known. This has been a tremendous advantage those who want to export anything on the world market.

This is especially true in Ohio, where the transportation infrastructure has helped make agriculture the No.1 contributor to the state’s economy. However, aging and decaying infrastructure, including locks and dams, is threatening statewide jobs and economic growth.

Today, Ohio Soy 2020 and the Ohio Ag Transportation Coalition are hosting the Locks and Dams Forum to educate participants from the agriculture and transportation industries about the condition and importance of transportation infrastructure to Ohio’s economy.

“In the transport business, time is money,” said Rick Calhoun, with Cargill Cargo Carriers. “But we have a system where more than 60% of the locks are more than 50 years old, and they were not designed to last 50 years. This results in frequent closures for repairs and costly delays. You need to keep these transportation assets moving on the river, otherwise, these assets are liabilities.”

According to the Army Corps of Engineers, fully one-third of Ohio’s 1,597 dams are in need of rehabilitation to meet state dam safety standards. Ohio’s ports are already among the nation’s busiest and the U.S. Department of Transportation only expects freight demand to grow, thus increasing the wear and tear on the nation’s transportation infrastructure.

The Inland Waterways Trust Fund currently collects taxes from the transportation industry to fund improvement projects, but the funds are too low and the Congressional oversight of the projects has reduced efficiency and timeliness while dramatically increasing costs. Calhoun said the industry is pushing for an increase in the tax for more funding, but also an improved delivery system for the projects. Without major change soon, there could be serious problems that could be catastrophic for the transportation system of the nation, and Ohio’s economy.

“Ohio is the sixth largest state for soybean exports in the U.S.,” said Patrick Knouff, Shelby County soybean farmer and vice chair of both the Ohio Soybean Council and the national Soy Transportation Coalition. “The timely and efficient transport of soybeans is critical to Ohio soybean farmers. If just one lock or dam failed during harvest, a lot of farmers wouldn’t be able to move their crops. The ripple effect of an event like that would leave a lot of people hurting.”

Attendees got to experience a lock firsthand, touring down the Ohio River from Chilo, OH to Newport, KY. They got to see firsthand the need for capital improvements and a new delivery system for funding. Calhoun