The Ty-Rade – A picture is worth 50 bushels

Seeing is believing. Over the past two months I have travelled to many parts of Ohio and I, like many others, have seen crops that look alright and crops that look poor. It is no secret that a big part of the Midwest is suffering through the worst drought in many decades. I have seen images on the news and pictures that have been sent in to us at The Ohio Ag Net, I even took a few pictures myself when I visited Farm Science Review fields a few days ago. 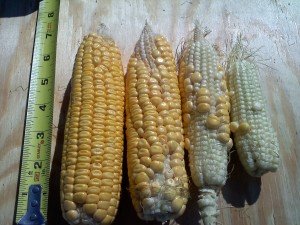 These four ears are from the same field. How in the world will crop tours be able to “guess” what will come out of America’s corn fields will a sample like this one? 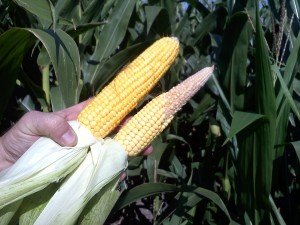 Here are two more ears from an FSR site.

It wasn’t until I made a trip to Defiance County just last week that I realized just how bad some areas are. Over the past 2 months I have received emails and calls about the severity of the drought in Northwest Ohio, and even attended a crop insurance meeting where I heard guesses of 20-30 bushel corn. Many farmers around Ohio will say this has just been “one of those years”, but for Northwest Ohio it is well beyond that and my heart goes out to those farmers. 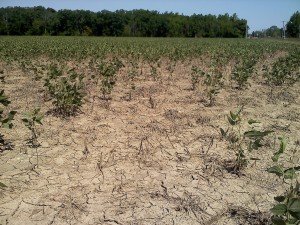 Here is a pretty common looking soybean field I found in Defiance County. As if the dry weather wasn’t enough, the affects of spider mites are being seen in fields there too. 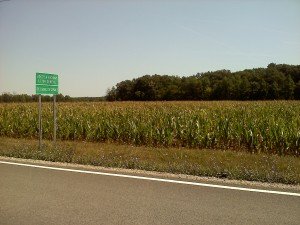 This is another common look to fields in Northwest Ohio. That sign is about 6 feet 6 inches tall, to give you an idea. Corn tassled awhile ago and you can see that it is starting to brown up. Very few ears came on and the ones that did are small. There may be a bit more than 20-30 bushel corn in this field, but I would say if it got 50 it would be a moral victory.

The Ohio Ag Net I-75/I-71 Ohio Crop Tour starts Wednesday and you can follow along with updates both tomorrow and Thursday.

Next week I will be heading west for the eastern leg of the Pro Farmer Crop Tour, travelling through Ohio, Indiana, Illinois, Iowa and Minnesota.

Needless to say these two tours will be very interesting and it won’t be long until farmers take in this crop, wipe off their brow and getting ready for what can only be a better 2013.