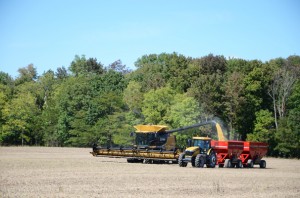 Seeing the corn stocks below one billion bushels will help give the bulls some reason for corn to move higher from these levels. Soybeans have been hit hard the past four weeks as they have dropped over $2.20 from their contract highs on Sept. 4.

Numerous analysts have been suggesting corn and soybeans have potential of putting in a bottom in coming weeks. Harvest pressure along with soybean yields better than earlier expectations have all contributed to weakness during the month of September.

The September report in past has been one of big surprises to the market. Along with those surprises have been major changes of sharply higher or lower, especially for corn.

In addition to releasing its Grain Stocks report, NASS also released the Small Grains 2012 Summary, which included the final tallies for the U.S. wheat, barley and other small grains. According to the report, in 2012 U.S. small grain farmers successfully rebounded from the 2011 adverse weather. In 2012, the growers harvested 49 million acres to wheat this year, producing 2.27 billion bushels, up 13 percent from 2011. Barley producers also saw a significant increase in production from last year. In 2012, the barley production is estimated at 220 million bushels, a 41% increase from 2011.