2012 tough on apples (and apple growers)

Eating an apple a day can keep the doctor away, but growing apples can be hard on your health, especially in a year like 2012.

It was a stressful year for apple producers in many orchards in the eastern U.S., including Sage’s Apples in Geauga County, just a few miles south of Lake Erie.

“Normally Lake Erie is frozen and that usually holds the warm weather back for us in the spring,” said Bob Sage, who runs the business with his brother, John, and son Ben. “This year the Lake never froze all winter and, because of that, we warmed up when everyone else did. That was about two weeks early.”

The early warm weather pushed the apple blossoms that suffered from spring frosts, leaving apple growers to stress over whether their crop was done before it even got started. Fortunately for Sage’s Apples, things turned out better than initially expected.

“The Lord blessed us with blossoms where we didn’t see blossoms. We have a crop to pick but it’s not a perfect crop. There was really severe freeze damage to apples throughout the eastern part of the country. We’re at around 60% of a normal crop,” Sage said. “Some varieties like Gala and Melrose have a full crop while other varieties hardly have any apples at all. Jonagold is about half of a crop.”

Maybe the most mental anguish resulted from thinning the apples in the already short crop. The frost damage did not kill the blooms uniformly.

“The lower parts of the trees were empty and there was a heavier crop on the top of the trees, so we still needed to thin out the crop to improve fruit quality,” Sage said. “Taking off apples when you have a short crop is hard on your heart.”

Then, the hot, dry weather through the summer added another set of challenges.

“The dry weather led to a smaller fruit size,” Sage said. “The Galas that are hard to get size on anyways are on the small side this year. Melrose apples are usually almost too big. Their size is down a bit and they are at a good size to eat or make pies. There was plenty of sunshine for photosynthesis and the apples are good eating because they are sweet. Last year was really wet and I’ll take the dry year over the wet year. We’d ideally like an inch of rain a week during the growing season. Now we’re getting rain and we don’t want it during harvest.”

The dry weather did help reduce apple scab pressure compared to 2011 and the heat itself did not result in apple sunburn as much as in other years. The insect pressure from plum curculio, codling moth and apple maggot was 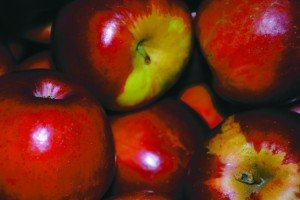 about normal this year.

But, as apple harvest continues, the bottom line is that there will be fewer apples this fall.

“There just aren’t going to be enough apples to go around for everybody and prices will be up. It starts with the cider price that serves as the threshold of how the industry is set,” he said. “There are no apples in Michigan and not many in New York. The grading lines are not being run so there are just not as many cider apples and the guys that press cider are having to pay more for their apples.”