We can finally begin to put 2012 to a close and look ahead to 2013. The drought of 2012 has raised several questions about possible management decisions for 2013 so let’s take a closer look at some of those questions.

One hot topic has been fertility for the 2013 crop. With lower than average yields in 2012, many growers have asked if they can cut back their fertilizer program for next year. It is true that with lower yields less fertilizer was removed from the field. For a farmer that applies fertilizer based solely off of crop removal, in theory less P and K could be 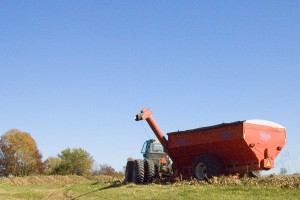 applied this year and maintain current soil fertility. I recommend this only be done with VRT fertilizer maps utilizing yield data since there is variable nutrient removal and yield throughout the field.

For most, however, I would suggest that they continue with their normal fertilizer program and use this as an opportunity to build soil fertility levels. As far as nitrogen is concerned I would not count on any carryover from this year to next year. The one exception to this might be where cover crops are being used to better utilize excess N that may be left in the soil from this crop.

I have also heard that some farmers are considering backing off corn populations for 2013. On many farms this year corn fields with lower populations handled the stress better. I think that it is safe to say that 2012 was an extreme year for many of us and should be considered an outlier when reviewing data concerning plant populations. The best management practice for 2013 would be to stick with the population that was planted in 2012.

Weed resistance also continues to be an issue for many growers. Several growers battled weedy bean fields at harvest this year. With the dry weather this year, weed control was difficult even for those without weed resistance. One tool to combat weed resistance that is growing in popularity is LibertyLink soybeans. Liberty is in effective herbicide with no known weed resistance. Using the Liberty system versus the Roundup system does present some different management requirements. Liberty is a contact herbicide, so coverage is critical. A minimum of 15 gallons of water is required and 20 gallons may be needed for larger weeds. The key to any program, regardless if it’s a Liberty, Roundup or conventional program, is the use of residual herbicides. It is also important to remember that weeds should be sprayed when they are four to six inches tall for optimum results. When weeds are taller chemical rates and carrier volume should be increased.

There is significant data that shows early planted corn still has the highest yield potential. There is no reason to leave the planter in the shed in April when planting conditions are right. The nice thing about the last two years, is that it’s good to know that if we are forced into a replant situation later in the spring that we can still have high yields.

In summary, it is important that we continue to manage our operations for maximum productivity. We cannot control Mother Nature but we can control our management practices. It is important that these practices are developed for conditions that will maximize yield potential. Only time will tell what conditions we will be presented with in 2013.