As of the second week of October, the U.S. corn harvest stood at 69% while the U.S. soybean harvest was 58%. Both reflected a record pace at that time. The price declines for November CME soybeans from $17.89 the first week of September to $15.06 the first week of October were aided by numerous reports of harvested soybeans yielding better than earlier expectations. Harvest in Ohio at the same time was 22% for corn and 23% for 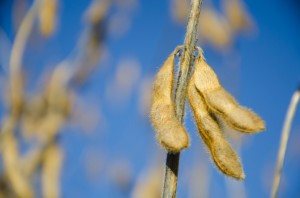 soybeans. In many parts of Ohio, producers were pushing on with corn harvest ahead of soybeans. Many had finished corn harvesting before making a major dent in harvesting soybeans. Soybeans were apparently slowed in reaching maturity due to rains during late August and early September.

In many parts of Ohio, producers are experiencing flat price corn prices nearly identical for fall delivery compared to January 2013. The market appears to be indicating the only reason to hold corn would be for higher board prices or already strong basis levels to improve even further in coming months. While some producers seem convinced that corn prices will once again reach $8 or higher in coming months, others are quietly making corn sales at $7.50 or higher. They seem perfectly willing to put the money into the bank while at the same time bypassing their bins, leaving them empty as they hope yields in 2013 are substantially improved.

The October USDA supply and demand report had corn production at 10.621 billion bushels with a yield of 122 bushels per acre. With the huge range of corn yields not only in Ohio but across the Midwest as well, it was no surprise that last month’s report had a record range of production from the low estimate to the high estimate of 1.2 billion bushels. In spite of the huge range of corn yields, one thing is certain — most producers are anxious to get 2012 corn and soybeans harvested as soon as possible so they can put it behind them. There are parts of Ohio, including Clinton County, where corn yields are above average. Those folks are seeing corn yields of 200 bushels or more per acre with great frequency. Unfortunately, that is the exception for Ohio corn yields in 2012.

Currently there are three major factors at work for grain producers and the prices they see — farmer sell rate, demand, and South America. A little detail is in order.

Whether they realize it or not, farmers are indeed in control of their own destiny for grain prices. During much of the soybean slide during September, there were only brief moments of farmer selling. It is not surprising to see farmers turn off their selling enthusiasm when prices fall rapidly or for several days on end.

Corn demand is lacking as the U.S. exports continue to shrink. Argentina corn is cheaper than U.S. corn by $50 per ton before freight costs. Soybean demand continues to be strong as China is buying almost every week. The soybean price slide of September did not happen as a result of shrinking demand. Rather, the price slide continued for weeks due to traders exiting positions and banking profits.

In addition, soybean open interest was nearly 200,000 contracts above that of a year ago. When a higher number of traders want out all at the same time, it can be an ugly scenario. That was the case in September. Lastly the market has already accounted for record soybean production in South America. Should there be any hints that this is not the case, prices could reach for and exceed the contract highs of early September.

Corn prices seem to be in a range of $7.20 to $7.80 as the market figures out the final U.S. corn yield. Soybeans could reach $14.60 as traders are reducing, not expanding, their long positions.